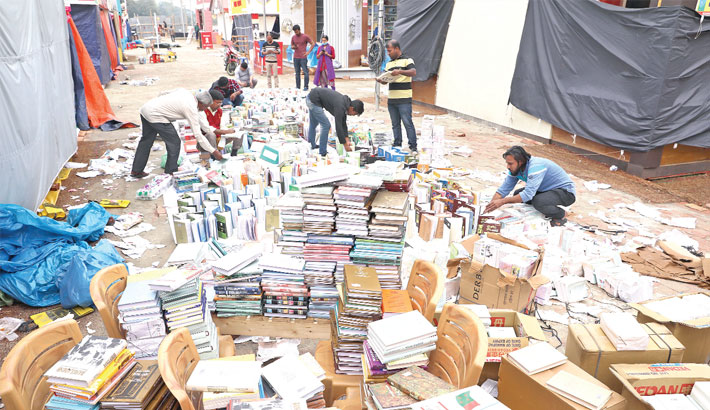 Workers of a bookstall separate soaked books and dry them under the sun at Suhrawardy Udyan in the capital on Sunday. Thousands of books of different stalls at Amar Ekushey Book Fair got soaked during heavy rain on the day. – Sun PHOTO

An early morning shower on Sunday caught the book publishers at the Amar Ekushey book fair off-guarded as it damaged huge books at the fair venue, reports UNB.

Jalal Ahmed, member secretary of the book fair management committee, told UNB that some stalls were also damaged due to the rain that swept the city coupled with hailstorm and temporary gusty wind.

“Stall owners had some precautionary measures. They used tin-sheets on the roofs of their stalls which saved them from greater damages,” Jamal said.

He said the book stall owners can claim compensation from insurance companies as insurance policy was made compulsory for the stall owners this year.

Jamal said the stall owners had suffered huge losses in previous years due to heavy rains. “So, the insurance policy was introduced to protect them from financial losses.”

The fair will continue as usual despite the damages of some stalls, he said adding that they took prompt steps to remove the stagnant water from the fair ground.

Visiting the fair venue, the UNB correspondent found many books lying in stagnant rainwater on the fair ground in the morning.

The capital experienced around 20mm of rainfall coupled with hailstorm, thunderstorm and temporary gusty wind, under the influence of seasonal low that lies over the South Bay.

A number of areas of the capital were inundated due to the rain causing huge sufferings to the city dwellers, including school, college and officers goers, in the morning.