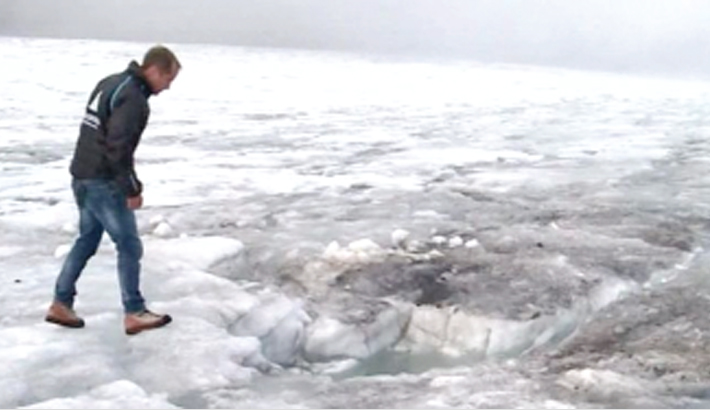 DNA tests have established that the remains found on a receding glacier last week in the Swiss Alps were of a couple that disappeared 75 years ago, police said Wednesday.

“The remains recovered on the glacier have been formally identified,” police in Switzerland’s Valais canton said in a statement. “They are of Mr.

Marcelin Dumoulin and his wife Francine Dumoulin, who disappeared tragically on August 15, 1942.” The couple had left their home in the village of Chandolin that morning hoping to check in on their cattle, which were being kept in an alpine pasture in neighbouring Bern canton.

The fastest route at the time was via a glacier footpath. The sky was clear when the couple set out, but clouds later worsened visibility and the couple vanished, likely after falling into a crevasse, orphaning five sons and two daughters.

They were discovered last Thursday—preserved in the Tsanfleuron glacier at an altitude of 2,600 metres (8,500 feet) — by an employee of a local ski resort.

Backpacks, a watch and other personal belongings had been preserved in the ice nearby.

One of their surviving children, Monique Gautschy, told AFP that police called to inform her of the definitive identification early on Wednesday.


Relatives have said that the discovery would finally give them a chance for closure and to organise the funeral that the Dumoulins never received.

That funeral will happen Saturday, Gautschy said, adding that she “would love to see them before then, just to embrace them.”

Marceline Udry-Dumoulin, who was four the day her parents went missing, told Le Matin that she climbed the glacier three times after their disappearance, “constantly wondering what had happened to them.”

The search was called off after several weeks and the Dumoulin children—aged two to 13 at the time—were sent to live with relatives and in foster homes.

“We spent our whole lives searching for them, without stopping. We never thought we’d be able to give them the funeral they deserved,” Udry-Dumoulin told Le Matin.

Granddaughter Maryline said that aside from the DNA tests, her grandfather’s distinctive watch and backpack, which he made himself, could help identify the bodies.

She said her two aunts—her grandparents’ only surviving children—were “happy they will finally be able to mourn.”