He raised his 6-year-old daughter up high, her pink dress a blossom of color in the crowd of dark-suited men in the Ritz-Carlton’s ballroom.

“I wanted her to see the prime minister,” said Abdullah Niami, who took his daughter, Zoya, out of her first-grade class in Northern Virginia last week to witness a sight America won’t see anytime soon — a female head of government.

Sheikh Hasina, the prime minister of Bangladesh, was staying at the Ritz in Northern Virginia — the low-key part of a tour that included the funeral of Queen Elizabeth II in London and an address to the U.N. General Assembly, where she appealed to “the conscience of the world community” to “build peace.”

This woman is a force.

Besides being the longest-serving female head of government in the world, leading a nation with more people than Russia and surviving at least 20 assassination attempts — including an especially bloody attack of hand grenades thrown into the crowds around her — Hasina is a grandmother. So on her 76th birthday, she celebrated with her son and her 16-year-old granddaughter, who live in a suburb just outside the nation’s capital.

“I cook for them,” she said, when I asked her how on earth a prime minister finds time to be a regular grandma. “Chicken biryani … At my son’s house, I have my own kitchen that’s just for me.”

We learn this because among her events during this leg of her journey was a one-on-one interview with me. 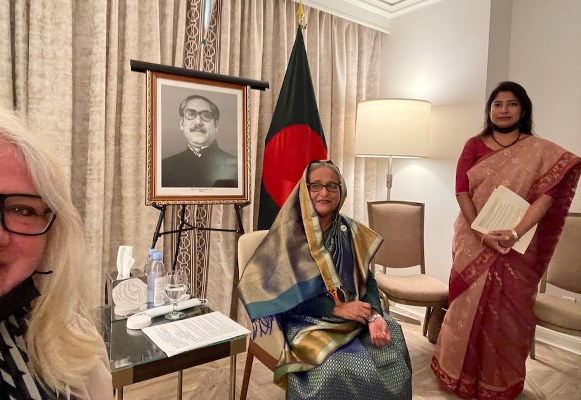 We sat in a lovely room with her translator and chief of staff, plus a giant portrait of her father, Sheikh Mujibur Rahman, the first president of Bangladesh and former prime minister who was assassinated along with 17 other members of her family in 1975. It is his legacy she is upholding as the nation’s prime minister for two terms, totaling 18 years so far.

It is a complex, roiling nation that she leads — and she is a complex leader. At the U.N., Hasina asked for help with more than a million Rohingya refugees who have fled the violence in Myanmar and settled in camps in Bangladesh.

“Camp life is not good,” she said. “They want to return to their country.”

Her nation’s migrant situation cannot compare with America’s, she said, when I asked her that question.

“America … is a vast country. Lots of land, lots of space, opportunities to do work,” she said, sweeping her arm north to south, and asked why should the United States “be worried about these migrants?”

Bangladesh ranks No. 8 in the world in population, with more than 171 million people. “But we are small,” she reminded me. Her chief of staff, who has obviously addressed this before, jumped in: “We are the size of Wisconsin.”

Bangladesh has faced international scrutiny for the conditions of the Rohingya refugees there, as well as ongoing accusations of censorship and an aggressive police force as Hasina’s administration cracks down on domestic terrorism.

It was that crackdown that prompted India’s Prime Minister Narendra Modi in 2015 to congratulate Hasina for her tough, zero-tolerance approach to terrorists, “despite being a woman.” 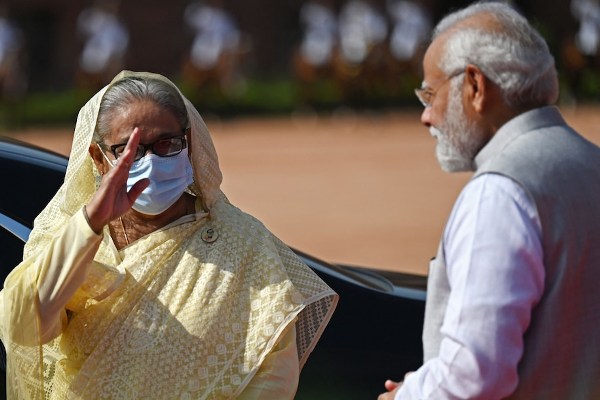 Hasina gestures to her Indian counterpart, Narendra Modi, as she prepares to leave after her ceremonial reception at India's presidential palace Rashtrapati Bhavan in New Delhi on Sept. 6. (Money Sharma/AFP/Getty Images)

That launched a viral meme and has endured as a point of pride for Hasina.

When I asked her about it, at first, she leaned over in a stage whisper: “Women are better than men,” she said. And laughed.

But seriously, she went on, because she is a woman, she said, she understands more intimately the struggle of poverty and education in Bangladesh, the obstacles that most women face, and how their stagnation slows a nation’s progress.

In the past decade, she’s significantly reduced poverty in her country, expanded educational opportunities and changed housing.

“No more of these, what do you call them, huts,” she said. Even if they are simple structures — brick with a corrugated steel roof — Bangladesh makes housing a human right.

“And it will be in the name of the man AND the woman,” she emphasized. And then the stage whisper again: “If they split up, the woman keeps the house. NOT the man.”

The World Bank gives high marks to growth in Bangladesh under Hasina’s leadership, noting it went from “being one of the poorest nations at birth in 1971” to reaching “lower-middle income status in 2015.”

Through health care and housing, Hasina said investing in the women of Bangladesh helped elevate the nation.

It was after she told all of this to the United Nations last week, when she thought she was starting the quiet part of her Western tour.

But word quickly spread among the Bangladeshi community in the area. And by the time she finished the interview with me, the posh hotel lobby was packed with her fans, including retired engineer Yusuf Chowdhury, 66.

“I got on a plane in Boston at 6 a.m.,” Chowdhury said, pulling out a card he said was proof he was a freedom fighter in the fight for Bangladesh’s independence in 1971. He wanted to see if he could help again. 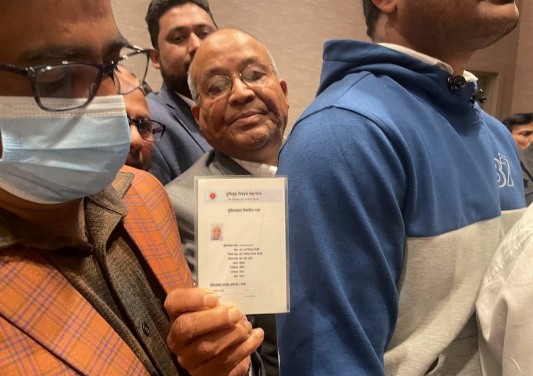 Yusuf Chowdhury, 66, a retired engineer from Boston, pulls out a card showing he was a freedom fighter in Bangladesh. He came to the D.C. area with the hope of meeting Hasina on her visit. (Petula Dvorak)

The hotel staff was overwhelmed. The prime minister’s security forces understandably — remember the 20 assassination attempts? — became agitated. The crowd cheered and surged like it was 1966 and Hasina was a Beatle.

But within an hour, they had a plan. Hasina agreed to address the crowd, the Ritz pushed the tables and chairs to the sides of their Old Dominion room, and security formed a frisk and scan line to clear and funnel at least 200 people into the ballroom. 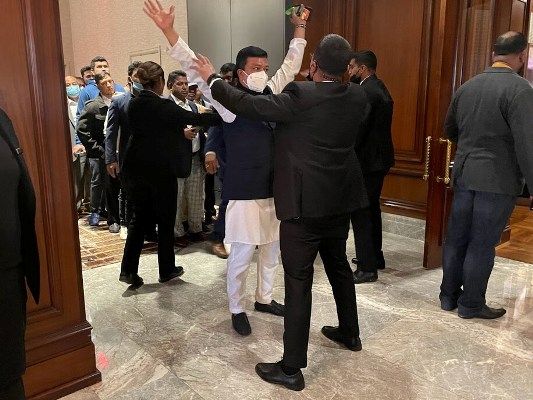 Fans of Hasina flooded the Ritz-Carlton in Tysons hoping to see her. Her security entourage screened everyone. (Petula Dvorak)

Most of the supporters were men. Except there was Zoya, in her pink dress and matching shoes. And Maliha Zaman, 24, who was on her day off.

“Of course I am coming to see a woman like this. She has inspired me,” said Zaman, who left Bangladesh two years ago, after she finished her master’s degree thanks to an education initiative that Hasina created. Now, she’s a software engineer and lives in Virginia. 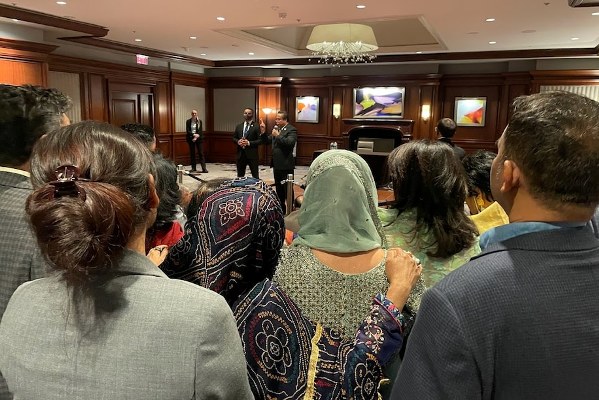 Maliha Zaman, far left, was among the crowd that came to see Hasina. (Petula Dvorak)

Zaman diplomatically explained how remarkable it is that the United States has yet to have a female president. And that the Ritz at Tysons seems to be one of the few places she’ll see one.

And as the men jostled to get a better position to see Hasina, another woman explained what made the prime minister special.

“She thinks about elderly people, education,” said Shaheda Parveen. “She worked on transportation, an important bridge. She thinks about children, she cares a lot about women who are pregnant. That’s what we all think about, too.” 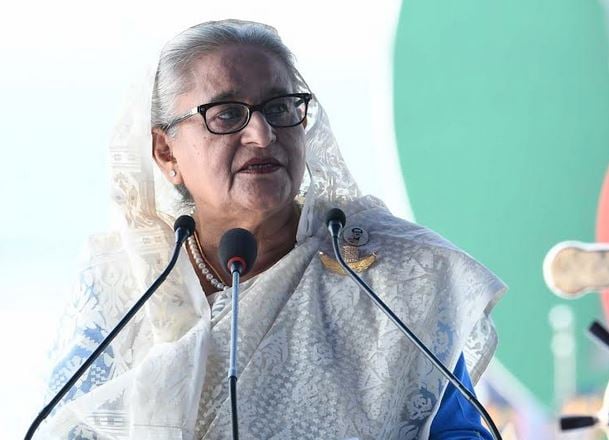 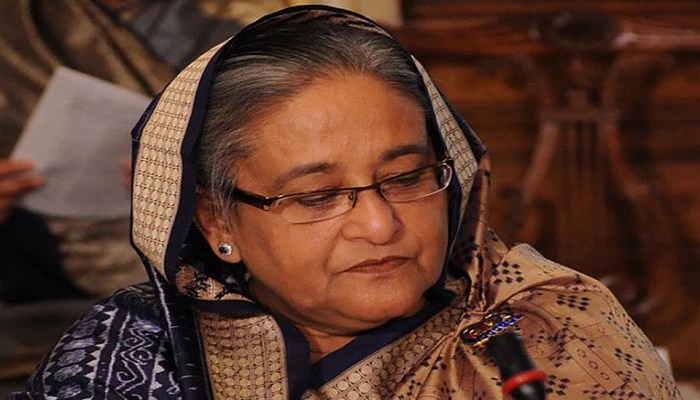 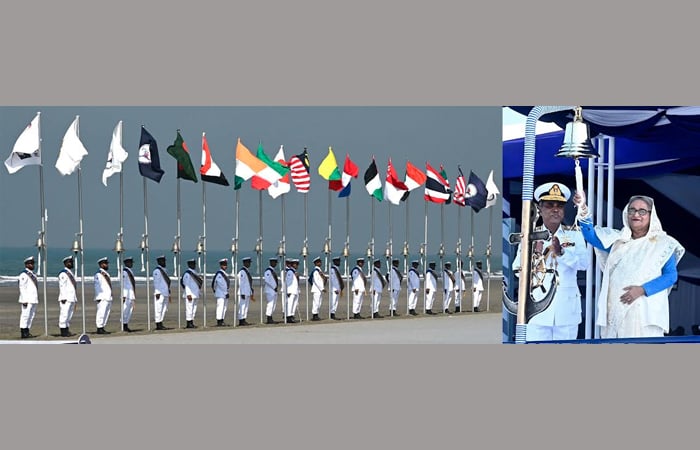