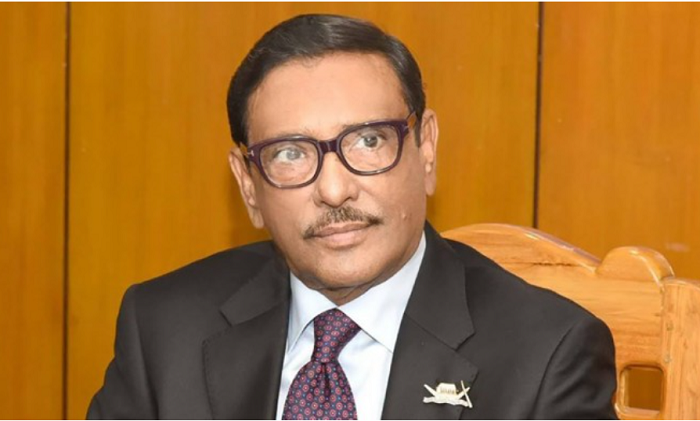 “BNP cannot witness any success or development works that the government did in the public interest ... the party is suffering from purposive blindness,” he told a press conference at his Secretariat office here.

About terming the lockdown as "tragic mockery" by BNP, Quader said actually BNP committed "pathetic joking" with the people, and that's why they cannot now understand what they are saying.

If they cannot perform politics or make remarks by using their conscience and wisdom, it's natural that they would make such reckless comments, he said.

The minister said sometimes the BNP leaders say lockdown is needed and demand its strict enforcement, but few moments later they say shutdown is not a solution  and demand compensation.

Once BNP carried out propaganda and misleading information against vaccination, he said, adding that BNP says the people will not abide by curfew though the government didn’t even think of imposing curfew.

He said many BNP leaders and workers have become inactive due to negative politics and irresponsible attitude of the party.

When BNP was in power, they plunged into irregularities and corruption and now they remain submerged in opportunism staying in the politics of opposition party, he said.

The AL general secretary said because of BNP’s stubbornness and evil strategy behind the mask, its components have already started quitting the alliance.

Now the BNP allies are disclosing BNP’s evil political game on capitalizing on people’s religious faith and belief, he said.

Describing BNP as a "completely failed" opposition party, the minister said BNP is now trying to cheer up their workers by making different comments to hide their failures.

BNP is now spreading hatred continuously against the government, but they have no works for the well-being of the people, he said, adding that actually BNP is doing the only thing constantly, and it's making blind criticism of the government.

Now the people don't pay any heed to such reckless comments of BNP, Quader said.

He said Prime Minister Sheikh Hasina’s government is working restlessly for the welfare of the people and it will continue in the coming days.

When the government along with the people is making its all-out efforts to fight the deadly coronavirus, BNP is continuously giving only suggestions and making exhortations in media staying at safe shelter, he said.

The AL general secretary said BNP is now playing as the role of "comment-based consultancy" leaving its role of political party after being isolated from the people.

The minister said the government has taken different initiatives including providing of special financial and food assistance on the occasion of Eid-ul-Azha and donations to farmers as well as is increasing the area and beneficiaries of social safety net programme.

But BNP cannot witness any of these works as according to them the government is doing nothing, he said, adding that BNP is now resorting falsehood and hiding the truth by putting head into the sand as like as ostrich.