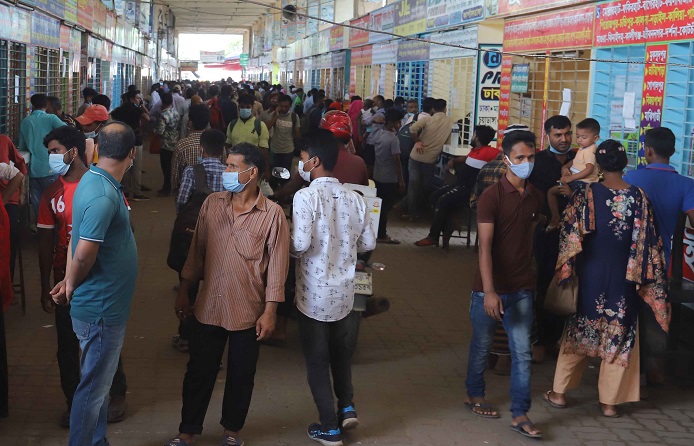 A large number of law enforcers, including police and Rapid Action Battalion (RAB) members, were deployed in and around each of the bus and launch terminals in the capital on Sunday ahead of Eid-ul-Azha festival.

Some plain-clothes police and RAB members in the guise of general people are also patrolling different crowded places, including cattle markets, bus and launch terminals and railway stations to arrest criminals, police and RAB sources said.

Police and RAB personnel have been deployed at Gabtoli, Mohakhali, Sayedabad bus stands and Sadarghat launch terminal to ensure safe journey of the home-bound people and create awareness about coronavirus among them.

At the same time, the elite force members are creating awareness among the home-goers about maintaining health guidelines, he said while talking to reporters during a visit to the launch terminal at noon.

The RAB official said like previous years, RAB also set up a control room at the Sadatghat launch terminal this year too.

RAB personnel are also keeping close watch so that no criminal, including muggers and Aggyan Party (Dope Party) members, can any cause harm to any home-bound traveller.

Meanwhile, people in large numbers continued to leave the capital for their village homes to celebrate Eid-ul-Azha with their near and dear ones.

Thousands of home-bound people were seen rushing towards bus and launch terminals on Sunday, mostly ignoring the risk of Covid-19 transmission.

Crowds were also seen at Shimulia ferry terminal in Munshiganj and Paturia in Manikganj.

Currently, 15 out of 19 ferries and 84 out of 87 launches are moving on Shimulia river channel, BIWTA sources said.

Some of the ferries are not operating due to strong currents in the river.

The authorities also did not allow the operation of three launches as they did not have updated documents, said the authorities.

Unable to control the unusual pressure of vehicles and passengers, the authorities brought two more ferries -- ‘Kakoli’ and ‘Kolmilata’ -- from Chandpur.

However, the queues of stranded trucks and other vehicles are getting longer and longer.

All the launches are defying government instructions to carry passengers at half capacity.

The terminal authorities said they have set up separate control rooms for serving passengers, but passengers are not maintaining social distancing rules and many are not wearing masks.

Assistant General Manager of Bangladesh Inland Water Transport and Corporation (BIWTC) Shafiqul Islam said strong currents are slowing down the movement of ferries, bringing down the number of trips.

He said around 1,000 goods-laden and other vehicles are waiting for their turn to cross the river at the terminal.