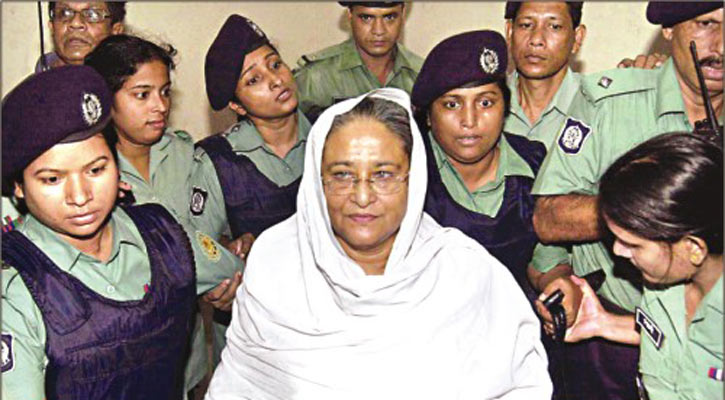 The ruling Awami League and its associate bodies will observe Sheikh Hasina’s imprisonment day amid the ongoing surge of coronavirus.

This day in 2007, then opposition leader and president of Awami League Sheikh Hasina was arrested from her residence Sudha Sadan in Dhanmondi during the state of emergency in the country by the erstwhile caretaker government which assumed power in the political changeover of 1/11 in 2007.

The party urged its leaders and activists to observe the day wishing long life and good health of Prime Minister Sheikh Hasina by maintaining health guidelines.

Swechchhasebak League, an associate body of the AL, will organise a discussion and milad mahfil at 11:00am at the fourth floor of the party’s central office on Bangabandhu Avenue, maintaining the health guidelines.

Marking the day, Bangabandhu Sangskritik Jote will organise a webinar at 11:00am.

Prime Minister Sheikh Hasina, however, was released from the special sub-jail set up on the premises of the parliament on June 11 in 2008 after remaining captive there for nearly 11 months.

As she fell sick during her captivity, demands were raised then from different quarters including the Awami League and its associate bodies to send her abroad for better medical treatment after releasing her from jail.

Conceding to the people’s spontaneous and repeated demands and pressure from different quarters, the caretaker government was compelled to release Sheikh Hasina from jail.