Bangabandhu Corner and Our Vision 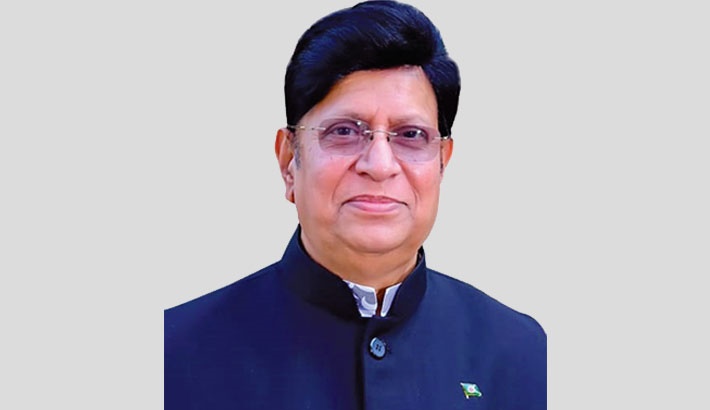 Bangabandhu Sheikh Mujibur Rahman is the name of an ideal, a philosophy, and of a realisation. He was one of the most courageous souls the world has ever produced who was firmly committed and dedicated to his mission to free the country from oppression and subjugation. He placed humanity above all, and he always fought for people's rights as well as for their well-being. Bangabandhu dedicated his whole life to ensure people’s economic emancipation and build a “Sonar Bangla”- a ‘Golden Bengal’- an equitable, prosperous and just society.

When Sheikh Mujibur Rahman alias Khoka was born on 17 March 1920 in Tungipara, Gopalganj in an aristocratic Muslim family, bringing joy and delight to the lives of his father Sheikh Lutfar Rahman and mother Saira Khatun, no one could have imagined that this boy would become a legendary figure, ‘people’s hero' and saviour of the Bengali nation.

In the course of history, with his resolute sacrifice, fearless leadership, and patriotism- he became 'Bangabandhu' – a friend of Bengal and devoted his entire life to establish the rights of the common people, to serve the people and humanity. Bangabandhu always pursued the rights of the exploited and oppressed people, not only of Bangladesh but across the world as well.

Bangabandhu not only dreamed of an independent nation-state named Bangladesh but also materialised their century-old dream of a Bengali nation- that is establishing an independent nation-state. Many political stalwarts, who came before and after Bangabandhu, tried to inspire the Bengali nation. But no one could awaken the Bengalis or unite the whole nation the way our Father of the Nation did. His charismatic and iconic leadership inspired them with the spirit of independence.

The Father of the Nation was not only a visionary leader of the Bengali nation, but he was the epitome of democracy, secularism, peace, harmony, and tolerance. To establish the rights of the common people, he never resorted to violence. Throughout his life, he chose the path of peace during all his political campaigns, all his political movements. For these ideals of his, he was in and out of jail and spent over 13 years in confinement sacrificing his personal comfort. His family was deprived of his company. His children grew up without seeing their father much. He was imprisoned day after day, year after year, but he did not ever express any regrets or complained against it. During his whole political life, he was actively involved in all the movements for the autonomy of the Bengalis, but all were carried out peacefully and legally.

After the independence of Bangladesh, Bangabandhu set up the bedrock of the foreign policy framework that was based on his ideals of peace and tolerance and thus ingrained a culture of peace into our foreign policy fundamentals. If you look at Bangladesh, you will notice that Bangladesh is pursuing a balanced and friendly foreign policy towards all the countries of the world. It has no adversaries, no foes in the international arena. It is because Bangabandhu designed the Foreign Policy of Bangladesh and its dictum is, “Friendship to all, malice towards none.”

It is truly our lifetime opportunity that we are being able to be a part of the celebration of two historic events-- golden Jubilee of Bangladesh Independence and the Birth Centenary of the Father of the Nation. Under the prudent guidance of Prime Minister Sheikh Hasina, National Committee and the National Implementation Committee have been involved in the whole celebration process since mid-2019. The Ministry of Foreign Affairs, along with all the Bangladesh Missions abroad, has joined in the celebration process across the globe with a view to disseminating the glorious history of Bangabandhu and Bangladesh.

I take this opportunity to inform you all that the Ministry of Foreign Affairs has been planning and implementing numerous remarkable events throughout the year to mark this significant and historic time in the lives of all Bangladeshis. In fact, the Ministry of Foreign Affairs opened a dedicated cell named “Bangabandhu Birth Centenary Celebration Cell” in June 2019. Even before Mujib Year had been announced, we displayed Bangabandhu’s leadership and diplomacy in a stall in the Ekushey Book Fair of 2020. We have already been able to establish Bangabandhu Corners in almost all our Bangladesh Missions abroad. Bangabandhu was the first-ever leader who delivered his maiden speech at the UN General Assembly in Bangla on 25 September 1974. On Mujib Year, the Ministry of Foreign Affairs took the initiative to commemorate the 46th Anniversary of this day in a grand ceremony where the Hon’ble Prime Minister was present on virtual platform.

Bangladesh Missions across the globe have organised numerous painting exhibitions, seminars, events and competitions over the year to mark this grand celebration. In the Headquarter, Bangabandhu Lecture Series was inaugurated on 16 December 2020 and has been continuing till date. Bangabandhu Research Centre for Foreign Policy and Diplomacy was also inaugurated by Prime Minister Sheikh Hasina in September 2020 with an aspiration to conduct continuous studies on Bangabandhu’s life and beyond. Due to the worldwide pandemic caused by Covid-19, most of the planned programmes could not be organised in many of the Missions located in different countries as well as in the Ministry. We are fortunate that Prime Minister has graciously increased the span of Mujib Year up to 16 December 2021. The Missions are aligning their programmes with the new reality to implement those with a renewed vigour.

As we celebrate the Birth Centenary and Golden Jubilee of our Independence, we are overwhelmed at the love and wishes of the world leaders and dignitaries that is being reflected by receipt of almost 200 wishes and messages.

Bangabandhu became envoy of world peace, through his vision, his policies and his works. He, therefore, extended unwavering support to the anti-colonial struggle in the world. He firmly believed in democratic rights and social justice as the cornerstone for building a peaceful world. Bangabandhu always adopted non-violence as a way of life and, as a consequence, he was awarded the Julio Curie Peace Prize on 23 May 1973- an international recognition for his outstanding contribution not only for the Bangalees or Bangladesh but also for the peace of the exploited and oppressed people of the world. Our Father of the Nation Bangabandhu Sheikh Mujibur Rahman in his UNGA speech in 1974 said, “Peace is imperative for the survival of humanity. It represents the deepest aspirations of men and women throughout the world.”

Embracing the ideals of her father, our Prime Minister Sheikh Hasina concluded the peace accord in the Chittagong Hill Tracts during her first term as Prime Minister more than two decades ago. She resolved critical issues with our neighbours, India, Myanmar through dialogue and discussion through peaceful means. She also became the ‘mother of humanity’ by providing shelter and humanitarian assistance to the 1.1 million hapless and persecuted Rohingya population from Myanmar, which is a unique example of humanity and compassion. Keeping all these perspectives into consideration, we are going to hold an International Conference titled ‘World Peace Conference’ at the end of this year with the participation of all reputed actors contributing to peace and security across the globe.

Bangabandhu's policy and his struggle, perseverance and sacrifice had inspired us, and it is still and will continue to encourage and motivate us, particularly the young generation, to follow his path of peace and harmony.

Dr. A. K. Abdul Momen is Foreign Minister of Bangladesh