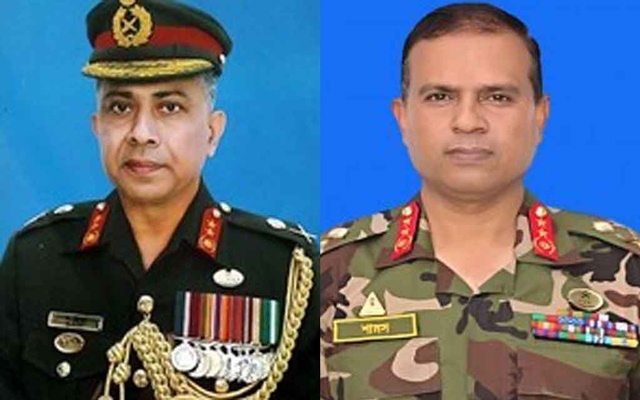 Major General Md Saiful Alam, the chief of Directorate General of Forces Intelligence (DGFI), has been promoted as Lieutenant General and assigned to take charge as Quarter-Master General (QMG) of the Bangladesh Army.

Besides, Major General Ahmed Tabrej Shams Chowdhury, the GOC of the 10th Infantry Division and area commander in Cox’s Bazar, has been assigned to DGFI as its director general, according to an official order of the army headquarters issued on Sunday.

General SM Shafiuddin Ahmed, who was appointed the chief of the Bangladesh Army in June, was the previous QMG. Md Saiful Alam will now take up the post he left vacant.

Md Saiful Alam was commissioned to the army as a cadet of the 14th Long Course of Bangladesh Military Academy. After serving as the area commander of the 11th Infantry Division of Bogura Cantonment, he was appointed Director General of Directorate General of Forces Intelligence on 28 February 2020.

Ahmed Tabrej Shams Chowdhury, who was appointed as the Director General of DGFI in his place, the GOC of 10th Infantry Division and area commander in Cox’s Bazar. Before assuming the charge of Cox’s Bazar Area commander, he served as the GOC of Ramu in Bandarban and Comilla Cantonment.