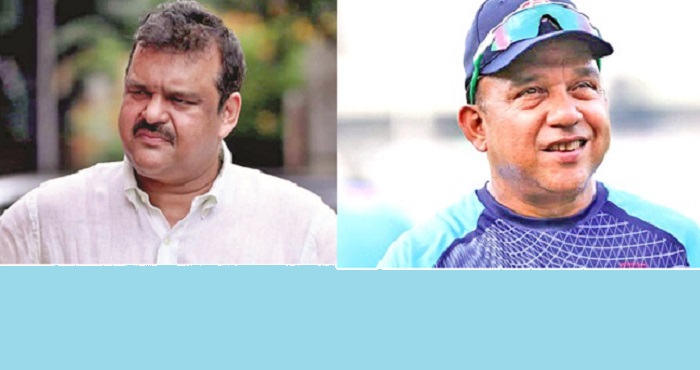 Bangladesh Cricket Board President Nazmul Hassan Papon was forced to intervene to solve the recent conflict between his two board directors Khaled Mahmud and Akram Khan ahead of the upcoming board election.

Nazmul called Mahmud and Akram at his residence for an impromptu meeting on Monday after he alleged in the media that he wasn’t informed regarding a lot of recent development in BCB cricket operation, where he happens to be the vice-chairman.

Mahmud pointed his fingers towards Akram - chairman of BCB cricket operation - as he didn’t inform his former national teammate about the appointment of new consultants - Rangana Herath and Ashwell Prince.

The recent tug of war surely placed BCB president in a bizarre situation as he’s expected to hold BCB AGM in the coming days as well as the elections after he completes his second term in September.

Mahmud told The Daily Sun that the inclusion of two new coaches was nothing but a surprise for him as he wasn’t even informed on the appointments.

“It was quite surprising to see that two new coaches were appointed and I don’t know anything. I’m the vice-chairman of BCB cricket operation but they didn’t take out time to inform me.

“I have learned about the appointment of a coach by reading newspapers and watching television. No one told me. Maybe I was in the bio security belt but I had a phone there.

“I'm not even sure if I'm actually the vice-chairman of cricket operation. Maybe I’m only by name because I never go to a meeting or call.

“I haven't received an email in the last two years and only got some in recent days. I used to be significantly involved with the cricket operations but now I’m not that much involved,” he said, adding that he’s still not convinced with the mindset of BCB cricket operation as they always prefer foreign coaches and don’t have the guts to promote local coaches,” said Mahmud.

“About the local coaches, I don’t think we still have the mindset to tag a local coach to the national team. It is fine even if we don’t hire local coaches for the head position but we can at least take a local coach as the assistant of the bowling coach.

“I’m talking about our guys getting the experience as if we appoint some local coach as the assistant of Otis Gibson, he would obviously learn from that experience and he would be able to share that experience to the others which would eventually help out under-15, 17, 19 teams,” he added.

Akram claimed that it wasn’t international from him and apologised for the mistake.
“He (Mahmud) has been like my younger brother for the last 30 years and I don’t have any grudge against him. He was in the DPL bubble and probably we failed to communicate with him over the matter and I’m sorry for that,” Akram told The Daily Sun. “But we don’t take any major decision without Mahmud’s consent,” he added.

Despite Akram’s acceptance of Mahmud’s accusation over the coach appointment, it was learnt that the entire development over the matter made BCB president upset.

The difference between Akram and Mahmud is growing stronger after BCB recently introduced the shadow national team that will be run by Mahmud and Kazi Inam Ahmed, another influential BCB director in the running committee.

Under normal circumstances, the initiative should have been taken by BCB cricket operation as they are the ones who are expected to form such a team but in reality, the idea came from others.

“The A team is next to the national team but do we have any scheduled tour for the A team? If there is a tour, we call up 15 players and we camp for roughly two weeks before the series. In my eyes, this isn’t proper training,” Mahmud shared his observation which clearly explained the reason of inception of Bangladesh Tiger, a shadow national team that recently has been approved by BCB.