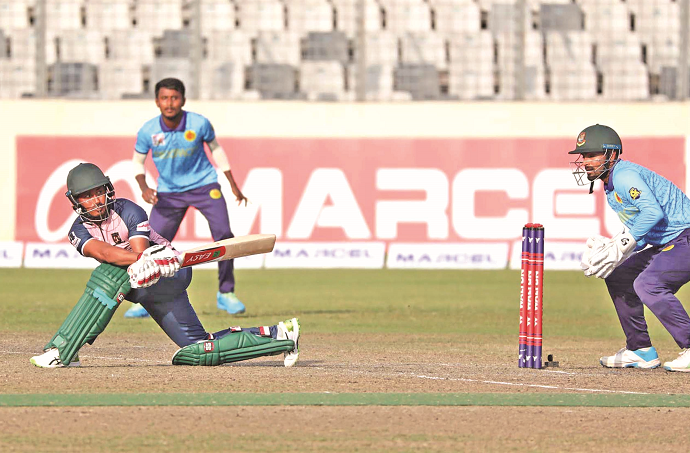 Reigning champions Abahani Limited suffered a big blow to defend their title after they conceded a six-wicket defeat to Sheikh Jamal Dhanmondi Club in their penultimate Super League match of the ongoing Dhaka Premier Division T20 League in Dhaka on Thursday.

Veteran Mohammad Ashraful struck an unbeaten 72 off 48 balls that guided Sheikh Jamal to reach 175-4 in 18.3 overs after Abahani made 173-7 in their stipulated 20 overs.

The defeat meant Abahani must have to beat Prime Bank Cricket Club in their last Super League match on Saturday to retain their title.

Both Abahani and Prime Bank earned 22 points from 15 and 14 matches respectively with the latter scheduled to play Prime Doleshwar Sporting club at the same venue on Thursday.

Despite losing in-form opener Munim Shahriar for a duck in the first over, Mohammad Naim and Liton Das repaired the early damage well by putting up 69 runs for the second wicket stand.

Naim was dismissed after making 42 off 28 balls but Liton, who missed the first phase due to injury, capitalised his start and went on to make 70 off 51 balls to help his side post a decent total on board.

Sheikh Jamal lost two wickets early in the chase but Ashraful and Nasir Hossain (36) steadied their innings by adding 69 runs for the third wicket.

Skipper Nurul Hasan then scored 36 runs while Ziaur made unbeaten 22 off nine balls to support Ashraful, who hit eight fours and two sixes in the innings, well and helped their side move fourth in the league table with 19 points.

“Abahani is a good team. Those, who play for them, are all young. They may have heard stories about my ability. Today I wanted to show it to them,” Ashraful said after the match.

Mahedi Hasan shone with the bat and ball as he claimed 2-22 to restrict Mohammedan to 165-6 before the all-rounder played a scintillating knock of 92 off 58 balls to guide his side to 166-7 in 19.3 overs to complete their first win in Super League.