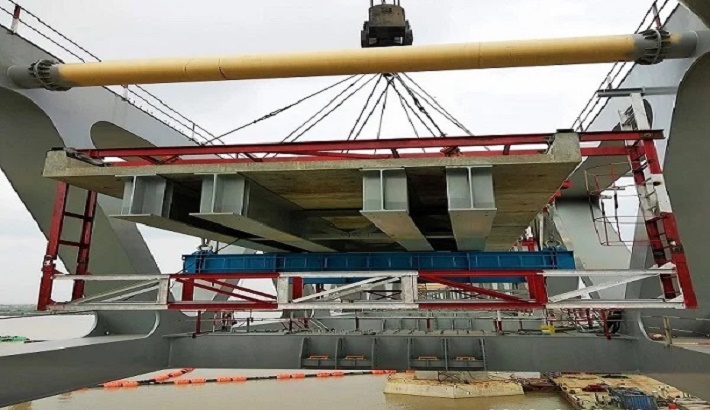 In a major development to the construction of Padma multi-purpose bridge, installation of all the rail slabs on the 6.15km under-construction mega project has been complete.

Project Manager of the main bridge Dewan Md. Abdul Kader confirmed on Sunday that all the required 2,959 railway slabs have been installed at the lower deck of the double-deck steel truss bridge.

However, work of land connecting railway viaduct is still underway, which is expected to be complete by this December, according to project officials.

Then, rail slabs will be installed on the viaducts as well to ensure rail connectivity through the bridge. The upper deck of the bridge will be use for road traffic.

Besides, installation of 2,689 roadway slabs out of 2,917 has so far been complete. Construction of roadway viaduct has been finished at Jajira, Shariatpur point, while that of Mawa side will be ready by next month, project officials informed.

They said all the construction work is now going on in the full swing to open the bridge to public by next June.

Apart from the bridge, a nearly Tk400 billion project is being implemented to set up a 169km rail line to establish a direct rail link between Dhaka and Jashore through the Padma bridge.

The government is trying to complete the 42km Mawa-Bhanga segment simultaneously with the construction of Padma bridge to give people the benefit of railway from the very first day of the bridge opening.

So far, the Padma rail link project has witnessed 77 percent progress, according to project officials.