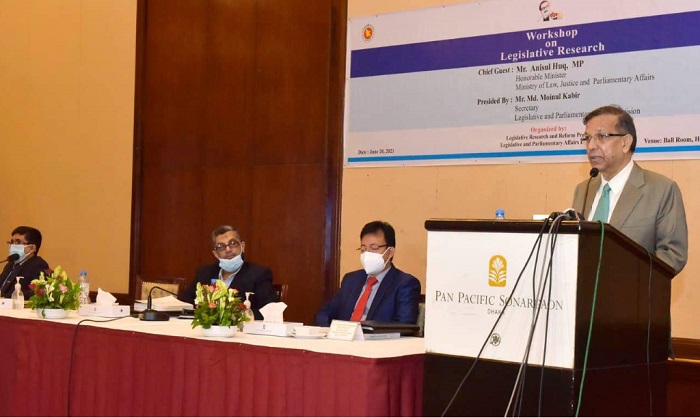 Law Minister Anisul Huq speaks at a workshop on Legislative Research at a city hotel on Sunday.

Law Minister Anisul Huq has stressed equality before law and equitable justice for achieving sustainable development of the country.

Awami League government led by Prime Minister Sheikh Hasina has adopted various steps to ensure application of law without discrimination needed to implement SDG and other goals, he said.

The law minister was addressing a workshop organised by Legislative and Parliamentary Affairs Division of the Law Ministry at Hotel Sonargaon in the capital on Sunday.

About law ministry’s role, he said “Legislative and Parliamentary Affairs Division is playing important role in executing Goal 16 (B) of the SDG.  We adopted a project to detect discrepancies in various laws and remove those. The project reviewed 1,286 laws enacted during a period from 1799 to 2020.

Prime Minister Sheikh Hasina has laid much emphasis on the research before enacting and amending laws and located adequate money for the purpose, he said.