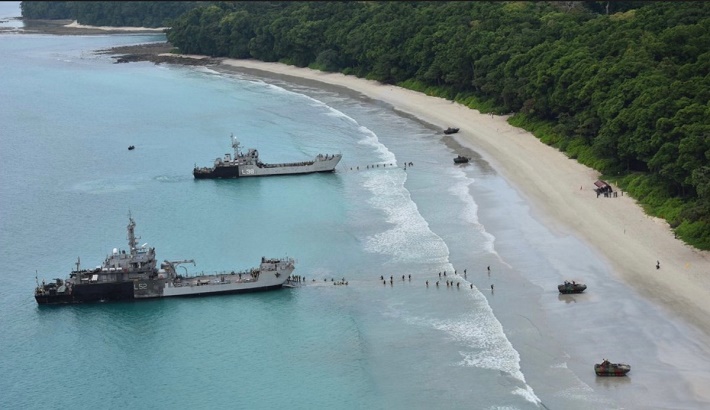 On June 9, the Indian and Thai navies began a three-day coordinated patrol in the strategically located Andaman Sea. The Indian Navy’s offshore patrol vessel INS Saryu and the Thai ship Krabi, along with Dornier maritime patrol aircraft from both navies, participated in the 31st edition of the India-Thailand coordinated patrol (CORPAT). The navies of both countries have been biannually undertaking CORPAT since 2005.

CORPAT aims to keep the vital subregions of the Indian Ocean stable and secure for global trade. According to Indian Navy spokesman Commander Vivek Madhwal, “The CORPAT builds up understanding and interoperability between navies and facilitates institution of measures to prevent and suppress unlawful activities like illegal unreported unregulated (IUU) fishing, drug trafficking, maritime terrorism, armed robbery and piracy.”

He added, “It further helps enhance the operational synergy by exchange of information for prevention of smuggling, illegal immigration and for conduct of search and rescue operations at sea.”

India’s engagements with key Southeast Asian countries are vital to secure the stability of the Andaman Sea at a time when China is deepening its strategic footprints and increasing its power projection capabilities throughout the Indian Ocean. Moreover, the need for India to utilize effectively the naval dimension of its Act East Policy is crucial to maximize its strategic partnership with its neighbors to the east.

The Andaman Sea continues to gain great geopolitical and strategic relevance as it joins the Bay Bengal with the wider waters of the Indo-Pacific region through the Malacca Strait. It is also a major and critical avenue that contains vital shipping routes that are used to transport a significant portion of the world’s energy trade.

The Andaman Sea is an established geo-strategic gateway to important sea lanes of communication (SLOCs) through which India can expand its reach towards the Pacific Ocean.

Therefore, to safeguard its interests, India has begun enhancing the capacity of the Andaman and Nicobar Tri-Command, which is the military command responsible for maintaining order in this particular maritime space.

The Malacca Strait and the Six Degree Channel are among the nine critical bottlenecks that regulate entry to this region. These passages are important trade routes for any shipping that is destined for Southeast and Northeast Asia. Furthermore, the Six Degree and Ten Degree Channels in the Andaman Sea – which lead to the Malacca Strait –  are critical to the SLOCs, where global commerce takes place.

The Andaman and Nicobar Tri-Command is thus bestowed with the duty to monitor vessels passing through these channels and guarantee freedom of navigation through the Malacca, Sunda, and Lombok Straits.

India, however, is not the only major power paying attention to the Andaman Sea. The SLOCs have long attracted China’s strategic interest and ambitions in the region. There have been reports of submarines of the People’s Liberation Army Navy being spotted near the Andaman and Nicobar Islands. Moreover, China has also invested in strategic infrastructure projects in littoral states to project power and influence.

Since 2008, China’s presence in the Indian Ocean has increased exponentially, along with its noteworthy economic and military rise.

China’s naval intrusions in and around the Andaman Sea have been a significant cause of concern for India and its national and regional interests. As China and India continue to stay locked in a competition for power and influence in the Indian Ocean, more naval activity will be expected. These circumstances that outline the importance of the Andaman Sea in India’s strategic calculus have catalyzed New Delhi to maintain efforts to ensure the security of the region.

Though New Delhi has taken the prerogative to bolster the defenses of the Andaman and Nicobar Islands, which includes a 10-year plan to establish facilities for additional troops, warships, aircraft and drones on the islands, strengthening the existing military facilities. However, India does not have to do it alone.

Prime Minister Narendra Modi’s Act East Policy is a crucial component in safeguarding the Andaman Sea. Along with the recent CORPAT with Thailand, India has also been strategically engaging with the Indonesian and Singaporean navies as well to ensure the peace and safety of the Andaman Sea.

In 2018, India and Singapore held their 25th joint naval exercise SIMBEX, which is an acronym for Singapore-India Maritime Bilateral Exercise, off the Andaman Sea and the Bay of Bengal. SIMBEX 2018 marked as the largest edition since 1994 in terms of scale and complexity.

In the same year, the 10th edition of Milan concluded with the Milan Exercise Sea (MILES), which saw participation of 20 ships – including those of Indonesia, Malaysia, Myanmar, Singapore, and Thailand – making it the largest multilateral exercise to be conducted in the Andaman Sea.

In 2019, the Indian and Indonesian navies conducted their 33rd coordinated patrol exercise from the Andaman and Nicobar Islands, where they will carry out joint patrolling of their waters. In 2020, the Indian Navy participated in a two-day trilateral maritime exercise – SITMEX-20 – in the Andaman Sea along with the Singaporean and Thai navies.

If India seeks to maintain the upper hand in the Andaman Sea, it must continue to engage proactively with its neighbors in Southeast Asia. There is no better framework to carry out such a level of cooperation than the Act East Policy.

India must maintain its steadfast and unwavering interest to forge closer strategic partnerships to its east. This is important and timely as several Southeast Asian countries also continue to be wary of China’s increasing military power in the region.