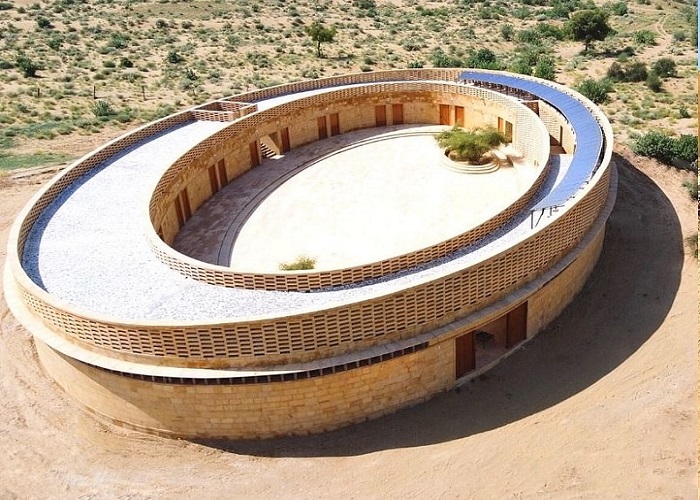 Can you imagine children studying in the middle of the Thar desert, where day temperatures peak close to 50 degrees Celsius and harsh winds cause sand to blow through the day?

An architectural marvel, located just a six-minute drive away from Jaisalmer’s famous Sam Dunes, has taken shape in Kanoi village, with an aim to educate girls and empower them. The Rajkumari Ratnavati Girls’ School is made of yellow sandstone, and surprisingly, has no air conditioners. Here, students can study and even play in the protected courtyard without worrying about the extreme weather.

The school is visually impressive, with an oval-shaped structure that blends in the desert landscape. The building also comes with elements of sustainability. The school portion, known as the Gyaan Centre, will accommodate 400 girls from kindergarten to Class X. The complex also has a textile museum and performance hall, as well as an exhibition space for artisans to sell their crafts. In another building, women will be trained in traditional arts like weaving and textiles to preserve dying handicrafts.

It took a decade for Michael Daube, founder of CITTA, a non-profit organisation, to conceptualise the building, and help it materialise. Michael roped in US-based architect Diana Kellogg, who conceived the design.
Diana travelled to India in 2014, and saw how life in the desert was thriving. “I have never worked outside New York, and it was difficult to comprehend building a project in the middle of the desert. But upon my visit here, I saw the beautiful buildings, music and art of Rajasthan. Even the step-wells here are an architectural wonder. The experience gave me the confidence that this project could be made,” she says.

She says the inspiration to design the building with elements of sustainability came from the surroundings. “I did not want to impose or incorporate any western ideas. I met people from nearby villages to understand the culture of the state. I observed the fluid characteristics of dunes, and in them, saw many symbols of womanhood,” she adds.

The architect says the oval shape kept coming up in her initial drawings, and that is how the ellipse structure was finalised. She adds that the shape also made practical sense, as it would reduce the distance between the different sections in the building. Having a courtyard for the building was familiar to Indian culture.

“The oval shape works, as it symbolises womanhood across many cultures. The symbol projects infinity and complements the landscape of dunes that merges with the school. It is also how the children play in circles or the women work in a community. The close circles of a community, like the extended aunts, uncles and relatives, are unique to Indian culture,” Diana tells The Better India, adding that the curves blend well with the forms of the forts that are round in Jaisalmer.

The elliptical shape of the structure also helps bring aspects of sustainability. “The canopy and the jalis filter the sand. They keep the sun and heat out. The pattern of airflow inside the building naturally cools it down,” she says.
The solar panels on top of the building work as a canopy, and provide shade while simultaneously powering the building. A cooling system uses geothermal energy at night to cool the building during the day.

Diana says that using local material to create the infrastructure helped reduce carbon emissions. “There are talented artisans in every village surrounding the school, and there could not be better material to use than sandstone,” she says, adding that this helped reduce the carbon footprint from transportation and logistics.

Finding the right man for the job

Kareem Khan, the contractor assigned for the construction of the building, says the courtyard in the complex can harvest 3.5 lakh litre of water and store it in its belly. “The inner walls of the building are plastered with lime, which insulates the building. The local sandstone has been used for construction, which provides protection from extreme heat during the day, and warmth during evening hours. To allow enough room for ventilation, we also revised drawings to make the classrooms and other offices bigger in size,” he adds.

Kareem takes special pride in this particular piece of work. “Many contractors rejected the offer as it seemed unfeasible, and they feared incurring losses. I came to know about the project through a friend, who told me that one non-profit organisation had been trying to make this work for the past 10-15 years, but had not found the right expertise. I was confident I could make it work and accepted the offer,” he says.

Though the architect started working on the structure in 2014, the construction only started in October 2018 and took one year to complete. There were many challenging aspects for Diana.
“As this project was being funded by a non-profit, I had to be very careful with the budgets. The hardest part was to make every dollar spent on it worth the cause,” says Diana, who worked pro bono on the project. She adds that blending the varying cultural aspects, languages and being critical proved challenging too. However, there are also many takeaways for Diana.

A ripple in the desert

The architect describes the craftsman as magicians for their stonework. “I remember an instance when we could not find the washroom sinks of the right size. The artisans carved them out of the stone. This would never happen in the US,” she says, adding that without the project, she would have never got the opportunity to work with cut stone.

Michael says he decided to build the school in Jaisalmer considering the disturbingly low literacy rate and a high dropout rate of school girls in the state. “The girls are in dire need of support. More women need to be empowered and educating them is the only solution,” he adds. The logo made for the school symbolises healthcare, women empowerment and education, which Michael says are crucial aspects to nurture and allow women to hold a powerful place in the world.

An artist himself, Michael believes that creating a space to explore will allow the girls to flourish. “I wanted to build a monumental school, where parents would feel proud to send their daughters to study,” he says.

The artists first planned the project in 2010, and spent the initial years finding the right opportunity to get all stakeholders in place. “I also spent time understanding the people, culture and other dynamics. It took time to convince the royals, politicians, celebrities and stakeholders to be a part of the cause,” he says, adding, “It is easier to raise money for slums in Mumbai than for causes such as this.”