US to honour Bangladesh's request for AstraZeneca vaccine: FM hopes 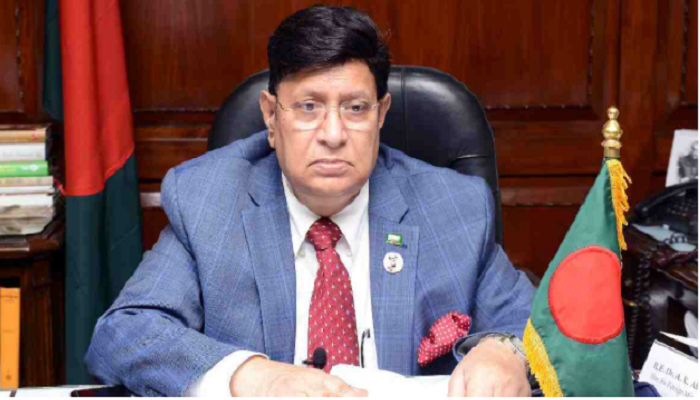 Foreign Minister Dr AK Abdul Momen on Tuesday hoped that the US will honor Bangladesh by providing AstraZeneca vaccine apart from other vaccines saying Bangladesh sought 20 lakh doses of the vaccine from the country.

“The US government told us that they will give us vaccines. They are yet to decide how many doses of vaccine they will be able to provide us. Naturally, there’ll be a push to that end so that we get it at the earliest,” he said.

While talking to a small group of journalists at his office, the Foreign Minister said Bangladesh needs at least 15 lakh doses of AstraZeneca immediately but sought around 20 lakh doses from the US. “I think they will honour us. Let’s see.”

The US reportedly wants to give Moderna and Pfizer vaccines for Bangladesh and Bangladesh is in discussion with China and Russia over vaccine procurement.

On June 3, the White House announced its plan to share vaccines directly with Bangladesh as part of a framework to provide 80 million U.S. vaccine doses globally by the end of the month. This includes 7 million doses destined for Asia.

A senior official at the Ministry of Foreign Affairs tod UNB that the Foreign Minister is likely to leave here for New York on June 13.

Asked whether he will travel to Washington too, the Foreign Minister said it is not decided yet.

He welcomed the win of his counterpart of Maldives Abdulla Shahid as the President of 76th Session of the United Nations General Assembly (UNGA). “It’s a good news for us,” he said.

Bangladesh has been elected Vice President for the upcoming 76th Session of the United Nations General Assembly (UNGA) from the Asia Pacific Region for a one-year term beginning from September 2021.

The election was held at the United Nations General Assembly on Monday where Bangladesh was elected unanimously.

Along with Bangladesh, Kuwait, Lao People's Democratic Republic and the Philippines have also been elected as Vice Presidents from the Asia Pacific Region.

Bangladesh last served as Vice President during the 71st session in 2016-2017.

After the election, Permanent Representative of Bangladesh to the UN Ambassador Rabab Fatima said Bangladesh is a flag bearer of multilateralism and believes in the leadership of the UN in addressing the complex challenges facing the current world.

"Bangladesh maintains principled and constructive position in various global discourses in the field of development, peace and security and human rights. Today’s election demonstrates the trust that the international community reposes on Bangladesh in the multilateral fora” she said.

The 76th session of the UN general assembly would be of particular significance as the world recovers from the COVID 19 pandemic and its multidimensional impacts, said the Bangladesh Mission in the UN on Tuesday.

The United Nations General Assembly (UNGA), consists of all the 193 Member States, and serves as the main deliberative, policy-making, and representative organ of the UN for multilateral discussion of the full spectrum of international issues covered by the UN Charter.

It meets under its president in annual sessions and generally starts from September, at UN headquarters in New York.