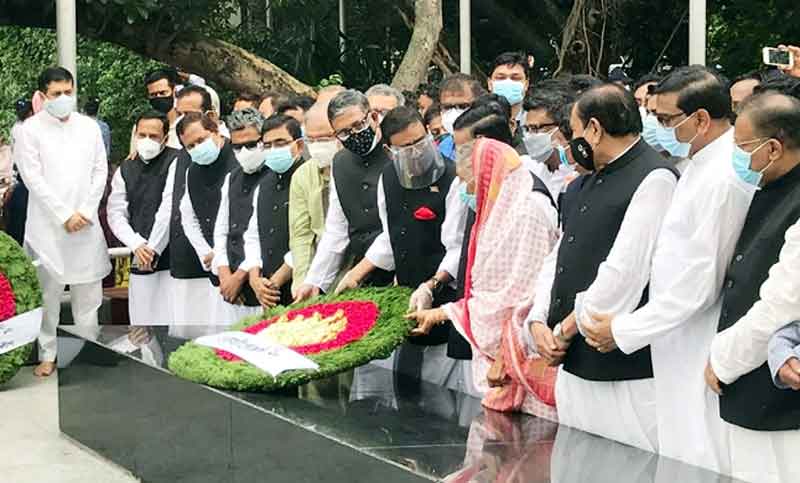 Awami League (AL) on Monday paid rich tributes to the portrait of Father of the Nation Bangabandhu Sheikh Mujibur Rahman in front of Bangabandhu Bhaban on Dhanmondi Road No. 32 in the capital on the historic Six-Point Day.

On June 7, 1966, Bangabandhu Sheikh Mujibur Rahman declared the Charter of Liberation of the Bengali Nation.

The AL under the sturdy leadership of Bangabandhu called for a day-long strike against the exploitation and deprivation of central government of the then Pakistan and demanded autonomy by ending its subjugation.

Eleven people, including Manu Mia, Shafiq and Shamsul Haque, became martyred in police and EPR firing in Tongi, Dhaka and Narayanganj during the strike called by AL.

On the occasion of Six-Point Day, on behalf of Prime Minister Sheikh Hasina, Awami League General Secretary and Road Transport and Bridges Minister Obaidul Quader paid homage to the portrait of Father of the Nation Bangabandhu Sheikh Mujibur Rahman.

Later, he along with party leaders on behalf of AL paid tributes to Bangabandhu by laying a wreath at his portrait.