Moot flays govt over sale of narcotics, announces rally from Malir to Lyari 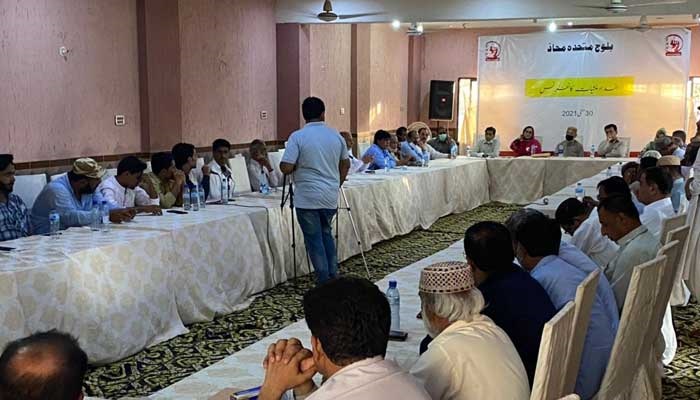 Showing concerns over the growing use of drugs among the youth in various parts of the city, particularly in Baloch-populated neighbourhoods, political activists, civil society and community leaders have said the sale and purchase of narcotics have significantly increased in the metropolis during the past few years.

The Baloch Muttahida Mahaz (BMM, a Karachi-based Baloch rights body, organsied a conference on Monday to highlight the issue in Siddiqi Goth, Malir. Yousaf Masti Khan, BMM head and a central leader of the Awami Workers Party, presided over the event.

The participants termed the spread of drugs a failure of the anti-narcotics force, police and other law enforcement agencies, and demanded of the federal and Sindh provincial governments to take steps to curb the menace of drugs.

They decided to carry out drug prevention awareness campaigns, the establishment of drug rehabilitation centres, and the formation of neighborhood-level committees. To mark International Day Against Drug Abuse and Illicit Trafficking, observed on June 26, a rally would be carried out from Malir to Lyari, it was decided in the moot.

An 11-member committee, headed by Dr. Asghar Dashti, was also formed to mobilise and coordinate with various organisations and people to make the rally successful. The conference also passed several resolutions calling on the government to set up wards for drug addicts in every hospital and to make the fight against drugs part of the manifestoes of political parties.

The moot reiterated the need for a continuous and consistent public campaign to control the harmful effects of drugs. MPA Saleem Baloch said the rehabilitation centres for drug addicts were being set up in Malir under a public-private partnership.