‘They fired at everyone’: Peril of Pakistani villagers protesting giant luxury estate 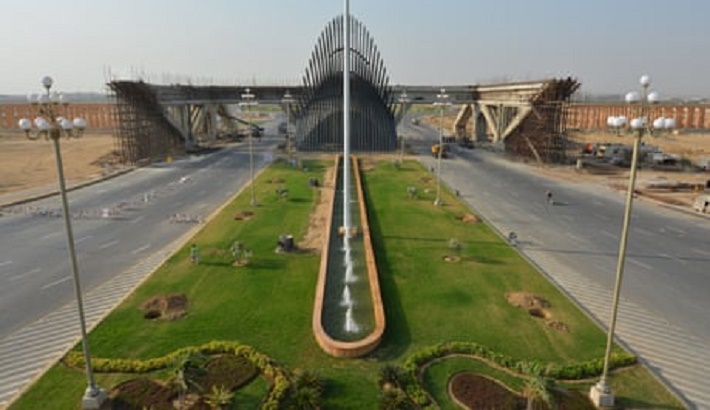 Muhammad Anwar was not aware of any danger when he took the day off work to join his friends at a demonstration on a construction site of a powerful real estate company.

When Anwar, 35, reached the west bank of Langeji river, near Karachi, earlier this month, he saw the bulldozers levelling land next to Bahria Town, a luxury gated development.

About 100 demonstrators were protesting against what they say is a forceful takeover of indigenous land.

“We asked them to stop working,” says Anwar. “They did not. We threw stones on the machinery to stop the work. We were asked to stop proceeding further [or] else they will fire on us. They fired at everyone. As I was in the front row, I got shot.”

With a bullet wound to his stomach and facial injuries, Anwar was lucky that his friends got him to hospital. Others, like Jan Sher Jukhio, were taken to the police station by Bahria Town guards. Jukhio says he was beaten with the butt of a gun.

“We gathered to save our lands,” says Jukhio. “We were beaten, dragged and in a state of injury we were given to police. I kept screaming to the police: ‘we should be taken to the hospital,’ but no one paid attention until more people came to the police station.”

Indigenous communities have opposed the Karachi project since its launch in 2014. The latest clashes began in April as activists resisted work to expand the housing complex into nearby villages.

Activists shared videos on social media with hashtags, including #SayNoToBahriaTown, and criticised the Pakistan People’s Party (PPP) and its Sindh provincial government for supporting the real estate giant.

On 30 April, PPP chair Bilawal Bhutto Zardari told Bahria Town and Sindh police to halt evictions in the villages. But bulldozers returned on 7 May and protests against the development saw 12 people, apart from Anwar and Jukhio, injured.

Allaudin (who goes by one name), 32, was at home on the morning of 28 April when he was told bulldozers and police had arrived. The day before, guards working for Bahria Town told his family the company wanted to build a road through his land. Allaudin claims he was told that if he did not agree to give up the land, it would be acquired by force.

“They destroyed my agricultural land and vegetation, wells from where we supply water to our crops and also use for our household,” says Allaudin.

Communities in Karachi’s Malir district rely on farming for their livelihoods.

Bahria Town is one of Asia’s largest private property developers, with construction projects in cities across Pakistan. Its owner, Malik Riaz Hussain, has denied any involvement in the evictions. “Bahria Town was never part of any illegal activities nor [do] we intend to be in future,” he tweeted.

In 2019, Britain’s National Crime Agency (NCA) seized more than £190m of assets from Hussain, including a £50m Hyde Park mansion in London. The NCA said the settlement did “not represent a finding of guilt” and that the money had been returned to the Pakistan government.

Bahria Town Karachi is a getaway from the urban sprawl for Pakistan’s elite. With its own security and roads, it offers luxury flats and facilities including a golf course and one of Pakistan’s largest mosques.

In 2019, Britain’s National Crime Agency (NCA) seized more than £190m of assets from Hussain, including a £50m Hyde Park mansion in London. The NCA said the settlement did “not represent a finding of guilt” and that the money had been returned to the Pakistan government.

Bahria Town Karachi is a getaway from the urban sprawl for Pakistan’s elite. With its own security and roads, it offers luxury flats and facilities including a golf course and one of Pakistan’s largest mosques.

Muhammad Amin, a resident of a village next to the development, said he was told by the company that Pakistan’s supreme court had agreed Bahria could take his land.

Amin says he was told by a Bahria Town representative that “if we do not leave, they’d flow sewage water into our lands and make living impossible”.

Murad Baksh refused to give up his land in Gabol village, but he says half was taken by force and he and his brothers were beaten.

Nasir Hussain Shah, Sindh’s information minister, says those attacking the villagers have been arrested. “We are dealing with the cases against Bahria Town and government officials. The government will protect them.”

No one at Bahria Town has responded to several Guardian requests for comment.

In a tweet earlier this month, Hussain said “influential politician and land mafia” who wanted to occupy the land were blaming the company. “Legally, the allotted area is the right of Bahria Town by law.”

“Bahria Town has not occupied any land illegally. By law, if someone proves that even there’s an inch of land which doesn’t belong to Bahria Town, we are ready to take complete responsibility of it. Bahria Town has always welcomed free investigation and will continue to do so,” it read.

“Bahria Town is a gift to the people of Sindh. It has provided the lower middle-class people with world-class lifestyle and infrastructure. It has made best efforts to provide them with high-quality facilities, security, schools, universities, hospitals, theme park, zoo, road network, water and electricity supply.”