Taskin finally proves his worth in ODIs 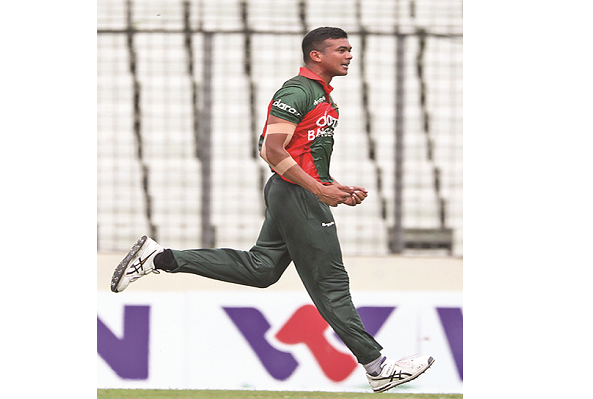 However, the 26-year old made a surprise entry in the same match after all-rounder Mohammad Saifuddin was ruled out of the match after showing concussion signs in the midway of the game and Taskin got the opportunity to feature in the game only as his like-for-like replacement.

Taskin, who had an ordinary performance, 0-62 in nine overs during the first match of the series, performed decently despite getting a late entry in the match and finished with 0-27 in eight overs.

The second match performance paved Taskin way back to starting XI in the third and final match and the right-arm pacer came up with an even better bowling performance as he grabbed a four-for in ODIs for the first time since 2017.

Taskin’s bowling figure of 4-46 in the match also made sure he’s not far away from becoming a regular feature in the ODI set-up.

However, his second-best ODI bowling figure couldn’t deny the visitors from posting a strong total of 286-6 after opting to bat first in the dead rubber contest.

Although Bangladesh team management earlier claimed that Taskin was rested instead of admitting his exclusion, it was clear that he failed to fix his spot in the playing XI through his performance as he could take only three wickets since his comeback against West Indies in January this year.

The arrival of debutant Shoriful Islam to partner Mustafizur Rahman and his lively bowling in the second game only raised questions over a permanent place of Taskin considering the spot of the third pace bowler in the XI was filled by Mohammad Saifuddin, who edged the other pacers with his batting.

After receiving a lifeline in the second match, Taskin looked more serious to deliver in the middle and although he failed to pick any wicket in that game, he kept up the pressure by maintaining his line and length.

Bangladesh skipper Tamim Iqbal also praised Taskin for showing his aggression during the post-match presentation after clinching their maiden series win over the islanders.

Tamim probably also realised that he needed to change his plan as far as getting the best out of Taskin and unlike the last game he used Taskin in four different spells of Sri Lanka innings.

After not getting any wicket in his first spell, Taskin took two crucial wickets of Danushka Gunathilaka (39) and Pathum Nissanka (0) in his second spell to give Bangladesh the first breakthroughs in the match while he also chipped in with one wicket each in his third and fourth spells.

England’s World Cup-winning skipper Eoin Morgan introduced pace bowler Liam Plunkett in a similar role and was quite successful in the long run.

Taskin bowled with the cross seam on several occasions, changed his pace to perfection and made sure that the tourists are troubled more often than not while facing him and reap benefits of bowling in the right areas consistently.

Taskin’s childhood mentor Mahbub Ali Zaki told The Daily Sun that he discussed with the pacer before the series regarding his bowling with cross-seam as he felt the formula is crucial for pace bowlers who bowled with relatively old balls.

“When you are bowling with cross-seam the ball wobbles and that is hard to pick for the batsmen,” Zaki said.