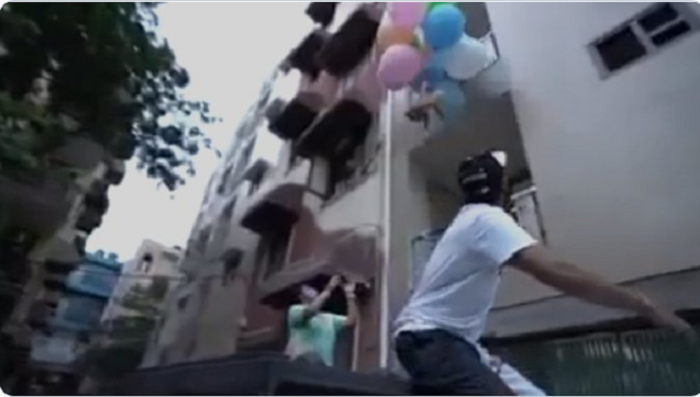 Indian police have arrested a YouTuber for tying helium balloons to his pet dog "in an attempt to make it fly".

Gaurav Sharma, 32, shot a video showing his dog attached to balloons, which he then lets go off as the pet starts to fly in the air.

A few seconds later, someone in the balcony of the second floor of a building catches the dog.

Mr Sharma said he followed all safety measures, but deleted the video after social media backlash.

He had posted the video to his YouTube channel which has over four million subscribers.

Police say they have arrested Mr Sharma after receiving a complaint against him from animal welfare organisation, People for Animals (PFA).
In the clip, Mr Sharma is standing atop a car and his dog can be seen strapped with helium balloons. He lets go of the dog at one point and the pet starts floating in the air briefly as it goes up to the second floor of a building. Someone appears to catch the dog as it floats up. Cheers can be heard in the video as the person appears to be saving the dog.

Mr Sharma later uploaded an apology and explained that he took "all safety measures" while making the video with his dog, Dollar.

In the video, he says that he was influenced by other YouTubers he had watched doing similar stunts. He asked viewers not to be influenced by his actions in the video. He goes on to say that he is a pet lover and treats Dollar like a child.

Delhi | YouTuber Gaurav Sharma arrested for cruelty to an animal after he posted a video on social media where he floated up a pet dog in the air by tying hydrogen balloons on its back, risking its life: DCP South Atul Thakur