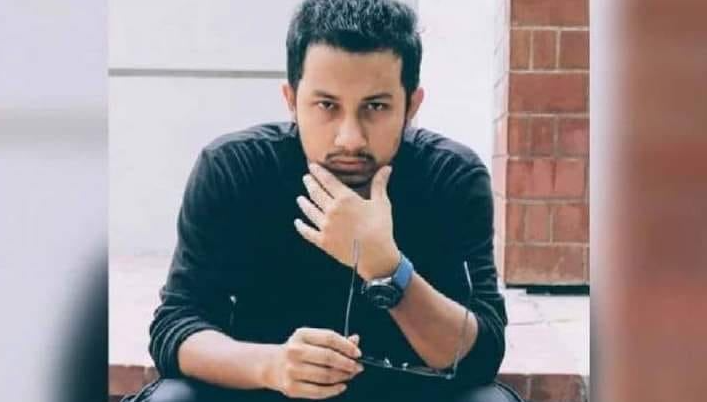 A rally to protest against the death of Dhaka University student Hafizur Rahman was held on the campus on Monday.

The body of Hafizur, who went missing over a week ago, was found at the Dhaka Medical College morgue on Sunday. He was a student of DU’s Information Science and Library Management Department.

Students from his 2015-16 session staged a protest rally at the base of the Raju memorial sculpture on Monday demanding a proper investigation to uncover what they said Hafizur’s mysterious death.

They urged the university authorities to file a lawsuit on the death. They said friends who were believed to be with Hafizur during the last week should also be interrogated.

"The university authorities failed to show their professionalism,” he alleged.

Tahmina Akter Labonno, a student of Islamic Studies Department said, "We want to know whether Hafizur's death was a murder or suicide."

Friends of Hafizur Rahman, and leaders of Socio-cultural organizations of TSC expressed their solidarity with protest.

"A full report has to be filed immediately after investigating Hafizur's 'unnatural' death," a DU press release quoting the VC said on Monday.

Hafizur's family members and friends claimed that he came to Dhaka from his village home in Brahmanbaria the day after Eid last Saturday.

He informed his family about his arrival over phone. But from that night onwards his family found the phone switched off.

When his family was unable to locate his whereabouts even after searching for him, they filed a general diary (GD)  at Kasba police station.

Later, the news of his disappearance was reported to Shahbagh Police Station.
Receiving a notification, Shahbagh police contacted the family after suspecting that the body kept in the morgue could be Hafizur’s.

Meanwhile, many of Hafizur’s friends and DU students mourned his death through social media, including Facebook.