Myanmar: Dozens of police reported killed in clashes with the anti-coup movement 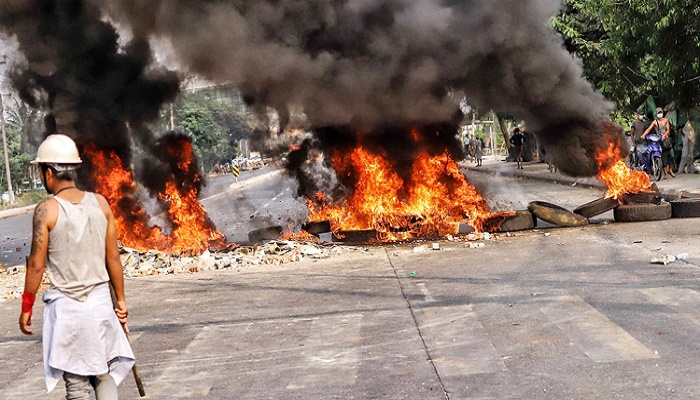 Dozens of members of Myanmar’s security forces were killed on Sunday, rebel fighters said, after heavy fighting in the eastern fringe of the country hit by the coup.

In one battle, the People’s Defense Force (PDF), an anti-junta civil movement that fights security forces with homemade weapons, said at least 20 police officers were killed and a police station seized in the city of Moebyel, state of Shan.

The police station was subsequently set on fire and rebel fighters also detained four members of the security forces, local media reported. Videos shared on social media showed what appeared to be the uniformed bodies of the security forces and smoke billowing from the destroyed police post and a police vehicle.

Other photos showed four men who were supposedly police officers with their hands behind their backs, blindfolded, and surgical masks.

The city lies about 100 kilometers (60 miles) east of the capital, Naypyidaw, and is close to territory controlled by some of the armed ethnic groups that have fought for greater autonomy for decades.

PDF member Thet Wai told Agence France-Presse: “I thought today is a day of conquest. But I am also concerned because today we have seen airstrikes and tanks. They have much better weapons than us. “

State television made no mention of the clash and Reuters was unable to reach a board spokesperson for comment on the clashes.

Myanmar has been in chaos since the February coup that toppled Aung San Suu Kyi, and the army used deadly force to suppress dissent. The number of civilians killed has risen to at least 815 people, according to a local watchdog group, prompting some to form fighting groups.

Aung San Suu Kyi is expected to appear in person in court on Monday for the first time, after weeks of delays in her legal case.

Another civilian combatant said that at least 13 soldiers had died in Demoso, Kayah state on Sunday, and that four of his men had been wounded.

“We intended to take over their police station, but they used air strikes and we couldn’t prevent their reinforcement trucks from entering the town,” he said. “We had to withdraw our troops from the fight.”

The Mizzima news service said thousands of people had fled after dozens of artillery rounds landed in their neighborhood.

The fighting continued until Sunday night, according to a senior leader of the Karenni National Progressive Party, an ethnic group armed with a stronghold in Kayah state.

He confirmed that the military was using tanks, helicopters and mortar attacks in Demoso and Loikaw, the capital of Kayah state.

An alliance of four armed ethnic groups also fighting the coup early Sunday morning with security forces at Muse, one of the main crossings into China, Myanmar media reported.

A government of national unity created clandestinely by opponents of the coup announced a new flag and command structure for the PDF, which was created to oppose the army.

The full program has yet to be aired, but in an excerpt released on Sunday it offered guarantees to Chinese investors after a series of arson attacks on factories in the commercial capital of Yangon. “Our citizens do not hate China,” he said. “It happened for political reasons.”

Aung San Suu Kyi has not been seen in public since she was placed under house arrest. She has been hit with a series of criminal charges including disobeying coronavirus restrictions during last year’s election campaign and possessing walkie-talkies without a license.

The European Union on Sunday denounced a proposal by the electoral commission appointed by the board to dissolve the Aung San Suu Kyi National League for Democracy.