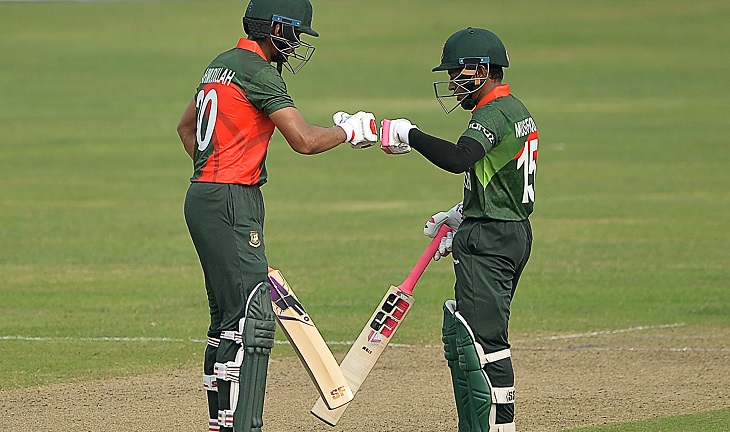 Bangladesh scored 257 for six in their stipulated 50 overs against Sri Lanka in the opening game of the three-match one-day Internationals at the Sher-e-Bangla National Cricket Stadium in Mirpur on Sunday.

Bangladesh were in trouble at 99-4 despite skipper Tamim Iqbal's 52 after they elected to bat in the first of the three matches in Dhaka.

Mushfiqur, who scored 84, and Mahmudullah, who made 54, then put on a key stand of 109 to thwart the Sri Lankan bowling with some attacking batting.

Udana and Vaas returned a negative result in a second test following initial positive results, but Fernando tested positive again and was put in isolation immediately.

Sri Lanka got off to a positive start once quick bowler Dushmantha Chameera dismissed opener Liton Das for nought in the second over but Tamim steadied the innings with his 51st ODI fifty.

Dhananjaya de Silva struck twice in one over to send back Tamim, and Mohammad Mithun for nought, in the 23rd over.

Mushfiqur and Mahmudullah put the innings back on track at 208-5.

Mushfiqur's 87-ball innings ended when he was caught by Udana at short third man off Lakshan Sandakan after attempting a reverse sweep.

Mahmudullah was bowled by de Silva after completing his fifty.

The series is important for both of the teams with the 2023 World Cup qualification in mind.

It is particularly important for Sri Lanka who was swept 3-0 in their only series of ICC ODI Super League against West Indies.

Bangladesh is in sixth position with 30 points, after beating West Indies at home by 3-0 and losing the away series against New Zealand by the same margin.