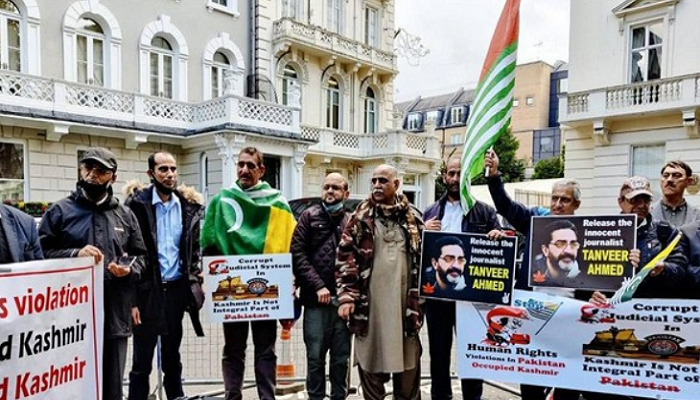 Members from several political organisations like UKPNP, JKNAP, and JKLF collectively held a demonstration in front of Pakistan High Commission, London, for the release of Tanveer Ahmed, a British journalist of Pakistan-occupied Kashmir (POK) origin.

The participants raised slogans against the Government of Pakistan for illegally occupying the state of Jammu and Kashmir and forcibly detaining human rights activists and journalists.

They demanded the release of Tanveer Ahmed and his companion Safeer Kashmiri, currently detained in a Pakistani jail for removing the Pakistani flags in Mirpur, POK.

The participants displayed banners declaring “Judicial System is corrupt in Pakistan and Kashmir is not an integral Part of Pakistan”. They also handed over a memorandum of demands to the High Commission.

Tanveer, a British citizen was arrested on August 21, 2020 in Dadyal Mirpur on the offence of removing flag of Pakistan from Maqbool Butt Square in Dadyal, which he claimed was in Kashmir and Pakistan had no right to hoist the flag there.