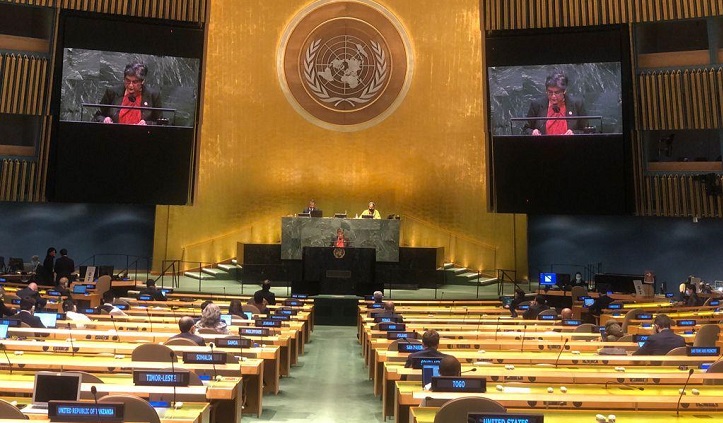 Bangladesh Permanent Representative to the UN Rabab Fatima has urged the international community to take urgent and decisive actions to resolve the longstanding crisis in Palestine.

She was speaking at the Joint Debate on the Situation in the Middle East and the Question of Palestine, on Thursday (May 20), convened by the President of the UN General Assembly.

Ambassador Fatima informed the General Assembly that Prime Minister Sheikh Hasina, in a letter to Palestinian President Mahmood Abbas, denounced the abhorrent acts of violence against innocent civilians of Palestine, including women and children.

Quoting Prime Minister Sheikh Hasina, she reaffirmed Bangladesh’s unflinching commitment in realizing the inalienable rights of the people of Palestine for an independent homeland, based on the pre-1967 borders with East Jerusalem as its capital.

In a strong call to the General assembly, Bangladesh Ambassador asked for an immediate halt to the Israeli aggression and deplored repetition of such senseless cycles of violence and atrocities by the occupying Israeli forces.

Ambassador Fatima highlighted some priorities towards a comprehensive, just and lasting solution to the Palestinian crisis and peace in the region, which included, the genuine efforts of the international community to address the root causes of the crisis and the fulfillment of the charter responsibilities by the Security Council and the General Assembly to turn around the culture of inaction and enforce compliance of all international human rights and humanitarian laws, and relevant UN resolutions, including resolution 2334 (2016).

She also called for engaging with all relevant actors to ensure early implementation of the Road Map, Arab Peace Initiative and the efforts of the Quartet.

Stressing that the humanitarian needs of the Palestinian people must be met urgently, Ambassador Fatima suggested to further strengthen the capacity of UNRWA.

Underscoring the importance of ensuring the accountability of the occupying Israeli forces, she said that it could be a first step towards guaranteeing justice and lasting peace in the Middle East.

More than 100 UN Member States participated in the day long Joint Debate which was also addressed by the UN Secretary General and President of the General Assembly. All speakers called for an immediate ceasefire in the Palestinian territory and an urgent resolution to the Palestinian crisis.