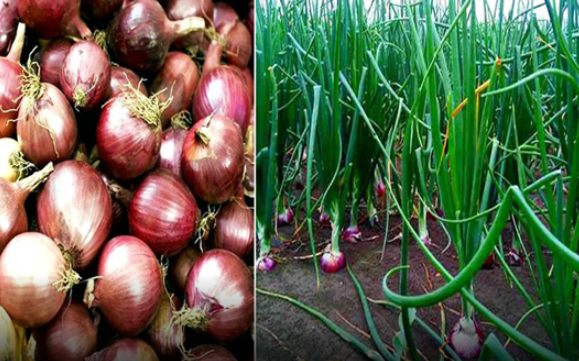 Farmers have produced an all-time record quantity of 1,06,205 tonnes of onion in all five districts of Rangpur agriculture region during the just-ended 2020-2021 Rabi season.

Officials of the Department of Agricultural Extension (DAE) said onion production continues increasing every year during the last 12 years following different realistic steps taken by the government to meet its local demand and attain self-reliance.

“The produced quantity of 1,06,205 tonnes of onion this time is higher by 16,235 tonnes than the production of 89,970 tonnes during the previous 2019-2020 Rabi season,” said Additional Director of the DAE for Rangpur region Agriculturist Bibhubhushan Roy.

The DAE had fixed a production target of 95,207 tonnes of onion from 9,750 hectares of land for the region at the average yield rate of 9.36 tonnes per hectare during the just-ended Rabi season.

However, farmers had finally cultivated onion on 9,392 hectares of land, less by only 358 hectares against the fixed farming target.

After completing harvest last week, farmers produced 1,06,205 tonnes of onion, higher by 10,998 tonnes against the fixed production target, at the average yield rate of 11.31 tonnes per hectare of land.

“During the last 2019-2020 Rabi season, farmers brought 8,235 hectares of land under onion cultivation and produced 89,970 tonnes of the spicy crop at an average yield rate of 10.92 tonnes per hectare of land,” Roy added.

Being inspired by officials of the DAE and getting incentives from the government, farmers are showing more interest in farming onions by directly sowing its seeds, transplanting seedlings and tuber varieties in recent years.

Getting quality onion seeds and fertilisers as incentives free of costs, small and marginal farmers cultivated onion on more lands, including on riverine char areas, to increase production and reap additional benefits this time.

The DAE, Spices Research Institutes and other agriculture related institutions and organisations are working to further increase onion production for meeting its local demand and attain self-reliance ultimately reducing its import to the zero level.

Retail vegetable traders Hafizur Rahman at Rangpur City Bazar and Fazlur Rahman at Keranipara Kitchen Market in the city said farmers are selling newly harvested onions at rates between Taka 1,400 and Taka 1,500 per mound (every 40 kgs) to wholesalers.

“However, retailers are selling onion at rates between Taka 1,600 and Taka 1,700 per mound or between Taka 40 and Taka 45 per kg depending on the size and quality on an average in local markets,” said Rahman.