Protest pours in over arrest of journalist Rozina Islam 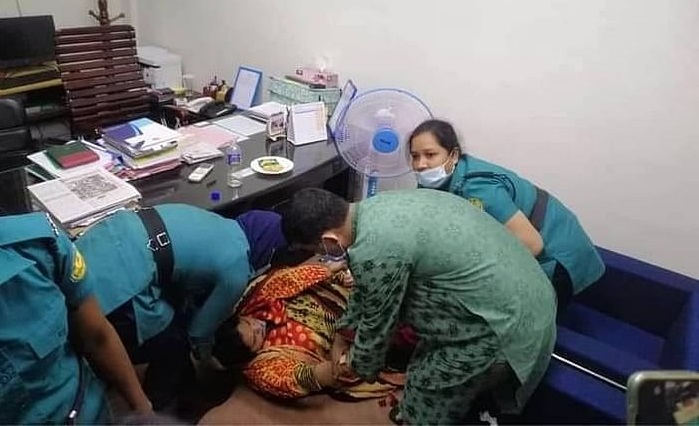 Journalist Rozina falls ill after being detained for hours in the health ministry on Monday.

Various journalistic organisations, rights bodies and political parties in home and abroad are in protest against the harassment of Prothom Alo’s senior correspondent Rozina Islam by confining her for five hours at the secretariat and handing her over to Shahbagh police station.

Meanwhile, several organisations and leaders of the journalist community have expressed their deep concern over the incident.

Some organisations held protest rally, human chains and protest meeting while some others issued official statements condemning persecution of the journalist Rozina Islam.

Protesting on the persecution, Jatiya Press Club President Farida Yasmin wrote on her verified Facebook page that Rozina had fallen sick. She also demanded proper treatment of the journalist.

Elias Khan, Secretary of the apex journalist organisation, also condemned the alleged misbehaviour of government employees at the Secretariat with the on-duty journalist.

The BSRF will hold an emergency meeting over the issue, Shamim Ahmed, general secretary of BSRF, said in a release.

M Abdullah, president of Bangladesh Federal Union of Journalists (BFUJ), said that the behaviour with Rozina Islam at the Secretariat was nasty.

Dhaka Union of Journalists General Secretary Sazzad Alam Khan told that the government should ensure that no innocent journalist will be harassed.

In a tweet, The New York based organisation Committee to Protect Journalists (CPJ) expressed deep concern over the detention of Rozina Islam and subsequent handing over to police. The organisation called for her immediate release.

Condemning the detention and harassment of Rozina Islam, Ain O Salish Kendra (ASK) in a statement said that Rozina Islam was working to ensure people's right to information through coverage of objective news. In her report, she highlighted various corruptions and irregularities in the health ministry.

Stating that the arrest and harassment of Prothom Alo's Senior Reporter Rozina Islam is an example of the government's obstruction to revealing the truth and corruption, BNP Secretary General Mirza Fakhrul Islam Alamgir on Tuesday demanded her immediate release.

In a statement, he also demanded the resignation of Health Minister Zahid Maleque and Health Secretary Abdul Mannan as he thinks Rizina was repressed at their behest.

“The government can’t avoid the responsibility of cruel attitude towards journalists in the Health Ministry. Although the health minister and the secretary knew about the incident, they didn’t take any step to rescue Rozina Islam. Instead, she was handed over to the police,” Fakhrul said.

South Asian Women in Media (SAWM), a network of women journalists across South Asia, has expressed deep concern at the harassment and arrest of Rozina Islam.

A SAWM statement on Tuesday demanded her immediate release.

“She was performing her duties as a journalist. She had been regularly reporting in depth on corruption in the health and other sectors,” the SAWM statement reads.

The National Human Rights Commission of Bangladesh has strongly condemned the harassment. The NHRC public relations department expressed this condemnation in a press release on Tuesday.

The press release said, “According to media reports, Prothom Alo’s senior reporter Rozina Islam was harassed by being confined to the secretariat for five hours on allegations of taking photos of the government’s document on the coronavirus vaccine without permission. The National Human Rights Commission of Bangladesh strongly condemns the incident.”

The chairman of the Commission Nasima Begum said that confining a journalist to the room of the personal secretary of the Health Services Division secretary for long is condemnable. According to media reports, Rozina fell sick but no arrangement for her treatment was made. Rather, she had been detained for five hours which the commission considered inhuman.

The commission also sent a letter to the secretary of the health ministry’s Health Services Division seeking explanation, the press release said.

The World is watching: GIJN

The Global Investigation Journalism Network (GIJN) has condemned the arrest of journalist Rozina Islam in a tweet saying, “What is going on in #bangladesh? One of the country's most respected women journalists is detained for hours. Hey, Health Ministry: journalism is not a crime! The world is watching.”

The GIJN is an international organisation which promotes investigative journalism.

Transparency International Bangladesh has strongly condemned the detention and harassment of investigative journalist Rozina Islam at the Ministry of Health while performing her professional duty.

In a statement issued on Tuesday, TIB has demanded immediate withdrawal of charges and unconditional release of Rozina Islam. It has also urged the government to show prudence by ensuring exemplary punishment to the culprits through proper investigation into the incident.

TIB's executive director, Dr Iftekharuzzaman said, "The harassment done by the officials of the Ministry of Health by confining a female  journalist for hours for allegedly stealing government documents is not only unethical but also a naked expression of anger towards her."

“We are astonished over the matter of persecution of the journalist Rozina Islam. We express our grave condemnation over the act. We are also demanding withdrawal of the case filed against her and immediate release of the journalist,” they said in the statement.

Diplomatic Correspondents Association, Bangladesh (DCAB) strongly condemned the confinement of the Daily Prothom Alo Senior Correspondent Rozina Islam for over five hours at a room at Secretariat and subsequent harassment.

In a statement on Tuesday, DCAB President Pantho Rahaman and its General Secretary AKM Moinuddin termed the incident an unacceptable attempt to intimidate media workers and demanded a fair and transparent investigation into the whole incident that took place on May 17, 2021.

DCAB demands Rozina Islam's quick release and urges the government to take appropriate actions against those who harassed her at the Ministry of Health and Family Welfare.