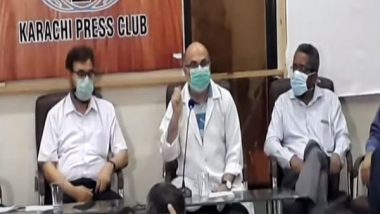 Doctors' community in Pakistan have threatened to suspend services until the government arrest Pakistan's Peoples Party's (PPP) legislator Nighat Orakzai, who led a mob to attack a COVID-19 hospital in Peshawar.

The doctors accused the woman lawmaker and others of harassing healthcare providers and using foul language against them, The News International reported.

The doctors urged the government to lodge FIR against lawmaker Nighat Orakzai and other culprits under the security act.

The incident took place on Friday night when a boy was taken to the casualty department of Hayatabad Medical Complex with a serious bullet injury on his head from the Jamrud subdivision in Khyber tribal district. The boy was reportedly caught in crossfire between two rival groups in Jamrud.

According to the HMC administration, the boy was properly looked after in the accident and emergency department and the family was informed about his critical condition.

"The neurosurgery team along with other doctors handled the injured professionally. He was in the operation theatre in the casualty department and the family was again informed about his condition," said Prof Shehzad Akbar, medical director of HMC.

According to Prof Shehzad, the doctors in the casualty department told them that they had nothing to do with the nature of the injury but they fulfilled legal requirements.

According to the doctors, the protesters were about to leave but alleged that the female legislator stopped them and decided to start a protest in front of the hospital.

The hospital administration and doctors present there accused Nighat Orakzai of using foul language without any reason against the prime minister, chief minister, health minister and the doctor community.

"She managed to enter the hospital from another gate along with several people, some of them armed, and came across some female doctors going to join night duty. She used extremely negative language against them and harassed them to a level that they had to run away to save their lives," the medical director explained.

According to the doctors, the protesters caused serious hardships to other critical patients being brought to the casualty department as the protesters forcibly closed the main entrance leading towards the emergency services.

Annoyed by this attitude of Nighat Orakzai -and her supporters, the doctors announced suspension of all services in the hospital as a mark of protest.