The past, present and future of space tourism 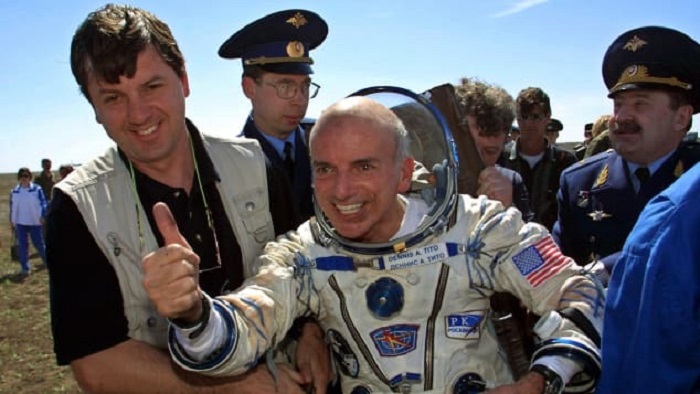 For Tito, then 60, it was the culmination of a dream he'd held since he was a young man, one he'd shelled out a cool $20 million for to make a reality.

Reflecting on the journey two decades on, Tito is gleeful when describing the moment the rocket first went into orbit.
"The pencils started floating in the air, and I could see the blackness of space and the curvature of the earth," he tells CNN Travel.

"I was euphoric. I mean, it was the greatest moment of my life, to achieve a life objective, and I knew then that nothing could ever beat this."

In the 20 years since Tito vacationed in space, only a handful of other -- uber wealthy -- tourists have followed in his footsteps, but companies such as SpaceX, Blue Origin and Virgin Galactic are banking on the next big vacation destination being out of this world, and working to make that a reality in the not-so-distant future.

Tito has been keenly keeping an eye on updates in the space tourism field -- he says he hopes many others will one day be able to experience the thrill of a trip to space.

"I just wish them the best," he says. "I am hopeful they will have the wonderful experience that I had."

When Tito embarked on his history-making trip in 2001, he was working in finance, but he'd started his career in aeronautics and astronautics.

Tito had been fascinated by space ever since he was a kid, and reckons he was paving the way for a space sojourn even then.
"When I flew in 2001, it wasn't just someone [saying], 'Oh I want to go become famous and fly in space.' This was a goal I set in 1961," he says.

That was the year that Soviet cosmonaut Yuri Gagarin became the first human to travel to space.
"I was fascinated by it as a young person," says Tito.

Later, when he changed careers and no longer worked in the aeronautics arena, Tito continued to dream of his own space flight.
NASA had long opposed the idea of sending civilians to space, but in 1991, shortly before the collapse of the USSR, Tito started talking to the Soviet Union about joining a space mission as a ticket-paying citizen.

He recommenced these conversations later that decade.

"In the late '90s, the Russians were really hurting for funding of this space program and the bottom line was, I figured out, 'Huh, maybe I could get involved with the Russians.'"

Fast-forward to April 28, 2001, and a Russian Soyuz spaceship lifted off from the Baikonur Cosmodrome in Kazakhstan with Tito on board, alongside two Russian cosmonauts. Tito spent the next week on board the ISS.

"It was eight days of euphoria," he says.

"I just enjoyed looking at the window, videoing the earth, the portholes, the station. It was just wonderful," Tito recalls.
"It just was -- whatever I had expected, the best I had expected times 10. It was the best experience of my whole life, those eight days."

The current state of play
Since Tito's historic flight, seven other private citizens have traveled to space, also coughing up millions to do so.
Each of these trips was organized via space tourism agency Space Adventures, with travelers transported on Russian Soyuz spacecraft to the ISS.

There haven't been any space tourists since 2009, which Space Adventures' representative Stacey Tearne puts down to the fact the US Space Shuttle program was retired, leaving Russian Soyuz craft as the only option for getting to and from the ISS.
Tearne tells CNN Travel that Space Adventures is confident the landscape will change again.

"In the future, we anticipate multiple providers and vehicles," she says. "Once there is competition in the marketplace, there will be competitive pricing."

Space Adventures remains in partnership with the Russian space agency -- in fact, they're currently working on a 2023 Soyuz mission to the ISS which includes the opportunity for a space tourist to conduct a spacewalk.

The company also has the rights to market seats on board Boeing's Starliner space capsule to private individuals, once operational flights to the ISS commence.

In the more immediate future, Space Adventures is planning a trip for late 2021 via SpaceX's Crew Dragon spacecraft.
NASA helped fund the development of Boeing's Starliner and SpaceX's Crew Dragon, but both companies remain privately owned, so they'll still have the option to sell seats aboard their spacecraft to anyone who can afford them.

The US space agency has changed its tune on space tourism since Tito's historical trip, announcing back in 2019 plans to open the ISS to tourists.

There's a marked difference between a trip to orbital space -- involving gravity-busting high-speed takeoffs and longer durations -- and suborbital space, in which travelers are briefly exposed to weightlessness and views of space during a flight to the edge of the atmosphere, 60 miles above Earth.

US company SpaceX, founded by Elon Musk with the goal of eventually flying humans to Mars, is perhaps the biggest hitter in the orbital space tourism arena.

In May 2020, SpaceX's Crew Dragon became the first commercial spaceship to send NASA astronauts to space and the company has plans to use the craft for a civilian-only journey later in 2021, with seats on offer for roughly $50 million each.
Billionaire Shift4 Payments CEO Jared Isaacman, who'll be one of those on board, is funding the trip.

Among those joining him will be Hayley Arceneaux, a 29-year-old cancer survivor and physician assistant at St. Jude children's hospital in Tennessee.

Arceneaux is set to be the youngest American to visit space, and the first person with a prosthesis to journey into space. Arceneaux, Isaacman and the rest of the crew are currently undergoing training for the journey, which is set to last several days.
SpaceX also signed a deal with Axiom, a startup founded by former NASA Administrator Michael Suffredini, to take a group of "private astronauts" to the ISS aboard a Crew Dragon in the second half of 2021.

NASA also recently awarded SpaceX with a $2.89 billion contract to build Starship, which it's hoped will land astronauts on the moon for the first time since the 1970s.

SpaceX hopes Starship will take Japanese billionaire Yusaku Maezawa and a group of artists to the moon in 2023. Musk also intends Starship to carry humans to Mars one day.

Now 80, Dennis Tito isn't sure if a return to space is in his future, but he's excited about movements in the orbital space tourism field.

"I'd love to be one of the first people to go with Starship to land on Mars, if I was physically capable," he says.
He figures they'll probably go for a younger crew.

"But I can fantasize about it," says Tito.

Meanwhile, Richard Branson's Virgin Galactic has been working on suborbital space tourism projects for some time, selling tickets at $250,000 a pop for the past several years. When the company eventually reaches this milestone, Branson is hoping to be one of Virgin's space tourists.

Other suborbital concepts include Florida company Space Perspective, which hopes to fly passengers to the edge of space in a high-tech version of a hot air balloon.

NASA scientist: 'You're not going to be able to keep people away'

Jeffrey A. Hoffman, a former NASA astronaut who now works in MIT's Department of Aeronautics and Astronautics, says he's "very enthusiastic" about space tourism as a concept.

"I am excited about the idea that many, many more people will be able to experience being in space, and hopefully bring back to Earth a new sense of their relationship with our planet," Hoffman tells CNN Travel.

Hoffman describes looking back at the Earth from space as being a reminder that "we're all in it together."
"Getting this idea of the earth as a finite system, and as a planet, is critical to our survival as a species," he says.

Not only that, being in space is fun, says Hoffman. He says the feeling of weightlessness, which is hard to imagine for those of us who've remained Earthbound, is incredibly pleasant.

"It's being in a state of elation the whole time, your body feels so incredible, different," he says.

"So I think a lot of people -- when the word gets back and these initial travelers tell their tales -- you're not going to be able to keep people away."

Hoffman describes Tito's 2001 flight as "breaking the ice" and marking "the beginning of a new era of space travel."
He's hopeful that the historically astronomical cost of space tourism will come down as demand increases, and the projects in development become a working reality.

"When you look at the travel industry, certain things are available to the general population, and certain types of tourism are only available at a much higher economic level. But gradually, things do tend to trickle down."

Hoffman suggests the main roadblock to space tourism -- aside from cost -- will be safety fears.
In 2014, a test pilot was killed during a Virgin Galactic test flight, while SpaceX and Blue Origin test rockets have exploded, with no injuries.

Hoffman says that, as with air travel, there will always be risk of accidents, but a consistent safety record will help get the concept off the ground.

While the launch dates of many of space tourism concepts have been pushed back several times, Hoffman is confident this year could be significant.

Would he consider returning to space as a tourist?
The space expert says he's often invited on cruise ships to give talks about his work, and he's hoping similar opportunities might one day exist on space trips.

"If someone invited me to come into orbit, and or even go up on a three-minute flight as an experienced astronaut and share the stories that would be great," says Hoffman.

"On the other hand, if I were in possession of $200 million, I'm not sure I would spend it on just another week in space, because I have been there. But I would love to go back."

Speaking of cruises, in 2019, Californian company the Gateway Foundation released plans for a cruise ship-style hotel designed to orbit the Earth's atmosphere.

Voyager Station, comprised of 24 modules connected by elevator shafts that make up a rotating wheel orbiting Earth, is set to be built by Orbital Assembly Corporation, a new construction company run by former pilot John Blincow.

In a recent interview with CNN Travel, Blincow said construction on the space hotel is expected to begin in 2026, and a stay at the hotel could be a reality by 2027.

The hotel hopes to highlight some of the fun perks of being in space -- there are plans to serve space food, and organize recreational activities like "space basketball."

SpaceX's Starship system could help get Voyager Station off the ground.

When the initial designs premiered a couple years ago, Tim Alatorre, senior design architect at Orbital Assembly Corporation told CNN Travel the hotel's aesthetic was a direct response to the Stanley Kubrick movie "2001: A Space Odyssey" -- which he called "almost a blueprint of what not to do."

"I think the goal of Stanley Kubrick was to highlight the divide between technology and humanity and so, purposefully, he made the stations and the ships very sterile and clean and alien."

Rather than the typical image of space -- astronauts in space suits floating in cramped quarters -- the team behind the space hotel want to create a luxury hotel that wouldn't look out of place on Earth, just with some pretty out-of-this-world views.

"We're trying to make the public realize that this golden age of space travel is just around the corner. It's coming. It's coming fast," says Blinclow.