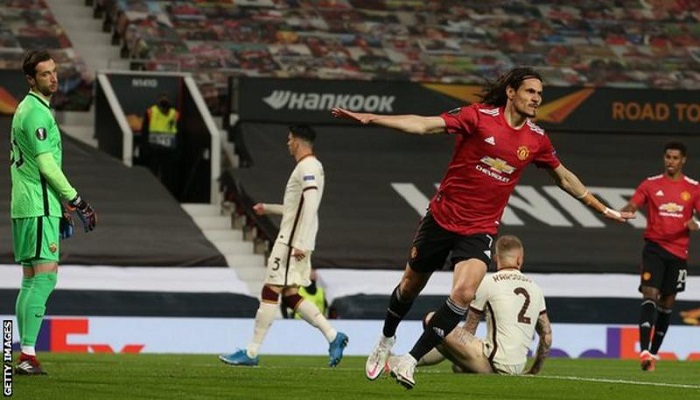 Bruno Fernandes and Edinson Cavani both scored twice as Manchester United came from behind to take a major step towards sealing a place in next month's Europa League final.

Fernandes gave United a perfect start in their semi-final with Italian side Roma when he swept home Cavani's first-time lay-off.

But United rallied after the break. Cavani levelled with a superb first-time effort before tapping the hosts back in front when substitute keeper Antonio Mirante pushed Aaron Wan-Bissaka's angled shot into his path.

Ole Gunnar Solskjaer's men were in no mood to let their advantage slip a second time, although it took a fortunate penalty for what seemed to be an innocuous Chris Smalling tackle on Cavani to give Fernandes the chance add a fourth from the spot.

Pogba then powered home a precise header from Fernandes' cross before Greenwood ran on to Cavani's pass and drove home United's sixth, making them the first side to score six goals in a major European semi-final since Real Madrid in the 1964 European Cup.

The final scoreline did not quite match United's epic 7-1 Champions League triumph against the same opponents in 2007 but for Solskjaer, a substitute on that famous night, it was just as sweet.

After four successive semi-final defeats in 15 months, the Norwegian really needs to get beyond that stage to silence his doubters, some of whom were never convinced he should have succeeded Jose Mourinho as United boss and point to an absence of silverware that both his predecessor and Louis van Gaal delivered in shorter reigns at the club.

Solskjaer's double fist-pump reaction to Cavani's equaliser underlined the importance of the Uruguayan's superb effort, swept into the top corner and part of a two-goal, three-assist contribution from the striker, whose contract expires in the summer.

For once, it meant Fernandes had to share top billing as he claimed two assists to go with his brace - although after a below-par couple of months, the Portuguese seems to have recovered his form at the right time.

Pogba is United's other big-name player and the midfielder ended an up-and-down night very much on the positive side, celebrating his header in style as the pressure was released.

Greenwood's effort means only a catastrophe in the second leg can prevent United reaching their eighth European final.

If there is one doubt over United's ability to lift their first silverware under Solskjaer in Poland next month, it comes from the goals they conceded.

There has been a long-standing feeling that the bare statistics around United's defence do not portray a true picture of their abilities.

They had conceded just one goal in six Europa League knockout ties prior to this evening - but it cannot be forgotten one of those that landed them in the competition in the first place was the ridiculous non-marking of Demba Ba during the shock Champions League defeat by Istanbul Basaksehir.

There was nothing on that scale - but in the modern era, Pogba was never going to get away with the ball hitting an outstretched, raised arm as he slid in to tackle Rick Karsdorp.

And the way Pellegrini was allowed so much space to drift into before supplying the low cross that invited Dzeko's finish highlighted a total lack of awareness on Fred's part.

Having let Pellegrini run free to devastating effect once, United should not have allowed it again after the break. They were fortunate the Roma skipper elected to pass rather than shoot from inside the box, just as David de Gea got lucky when the rebound flew to safety when he cannoned a clearance downfield straight into Dzeko, who was on his own on the edge of the area.

In the end though, the Italians simply did not have the quality needed to get a result that would give them a chance in next week's return, although they were hardly helped by having to make three injury-related substitutions before half-time.

Manchester United's next game is in the Premier League against Liverpool at Old Trafford on Sunday, 2 May (16:30 BST).

'We took our chances' - what they said

Manchester United boss Ole Gunnar Solskjaer told BT Sport: "No, I don't feel the job is done but it was a good job done. We did well but we know they have quality - the second half was very good.

"That's a very good team, it worked really good against Tottenham. Mason Greenwood should be disappointed not to be playing but it's about balance. We know we have got creative players who can create big moments. Paul Pogba's position today was very good in that position, he's allowed some freedom. He's got the foundation behind him. The difference today is we took most of our chances.

"The character showed that they came back and didn't lose their heads. Maybe five or 10 minutes at the end of the first half we didn't look great, but we got ourselves together. The two goals are junior, schoolboy errors that shouldn't happen at this level."

Six of the best - the best of the stats

--Manchester United are the first side to score six in the semi-final of a major European competition since May 1964 when Real Madrid beat FC Zurich 6-0 in the European Cup second leg.

--Roma are the first Italian side to ship six goals in the semi-final of a European competition.

--Roma became the first side to make three substitutions in the first-half of a Europa League game (since 2009).

--Bruno Fernandes (20) is only the third player in Manchester United's history to score 20+ penalties, after Ruud van Nistelrooy (28) and Wayne Rooney (27).

--Three of the past four penalties Manchester United have conceded in all competitions have been given away by Paul Pogba, while the Frenchman has conceded four of their past six at Old Trafford.

--Edinson Cavani made it 50 goals in major European competition (15 in the Europa League, 35 in the Champions League), with the Manchester United attacker, at 34 years and 74 days, the oldest player to score a brace at the semi-final stage or beyond in major European competition since Philip Cocu (34y 187d) for PSV Eindhoven vs AC Milan in the Champions League semi-finals in 2004-05.

--Mason Greenwood has scored 27 goals for Manchester United in all competitions, the third-most of any player in the club's history before turning 20 after Norman Whiteside (39) and George Best (37).