Covid: France aims to reopen cafes and restaurants in May 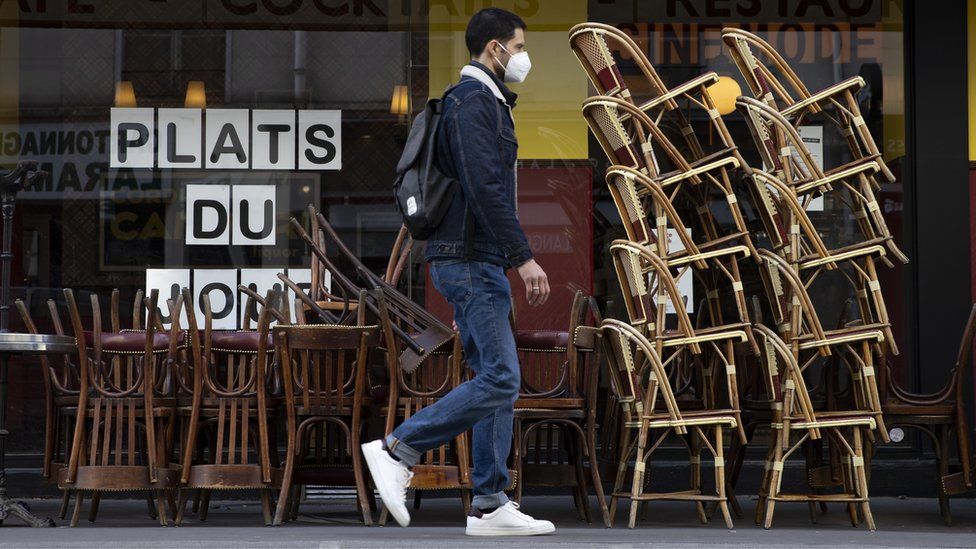 France will allow cafes, bars and restaurants to serve outside and relax a nightly curfew in a planned easing of lockdown measures starting next month.

The four-stage plan outlined by President Emmanuel Macron aims to largely reopen the country by 30 June.

Foreign tourists with a Covid-19 "health pass" will be allowed to visit France again from 9 June.
France's infection rate has fallen since introducing a third lockdown, but numbers remain high in some areas.

On 3 May, secondary-school and high-school pupils will start returning to in-person classes. Rules on travelling will end

On 19 May, a current 19:00 (17:00 GMT) nightly curfew will be pushed back to 21:00. Cafes and restaurants will be able to reopen outside. Non-essential shops, cinemas, museums and theatres will be able to open, with restrictions on visitors.

While Mr Macron said he hoped the measures would ease across the whole country, an "emergency brake" could be used "in territories where the virus is too present".

Foreign tourists from outside the EU will be able to enter France on 9 June. But they will need to show a pass sanitaire - or health pass - the details of which have not yet been revealed.
A pass will also be needed to attend large events.

"The health pass should not be mandatory for access to everyday things such as restaurants, theatres and cinemas or to go see friends," Mr Macron said. "But for places with big crowds, such as stadiums, festivals, trade fairs or exhibitions, it would be absurd not to use it".

France entered a third national lockdown on 3 April, as it battled a surge in cases that threatened to overwhelm hospitals. The daily number of new cases has fallen since then, from around 40,000 to 27,000 on average over the past week.

A further 324 deaths were reported in the past 24 hours. The total number killed by the pandemic in France is now at least 104,079, Johns Hopkins University estimates.