Zimbabwe elect to bat first against Pakistan in first Test 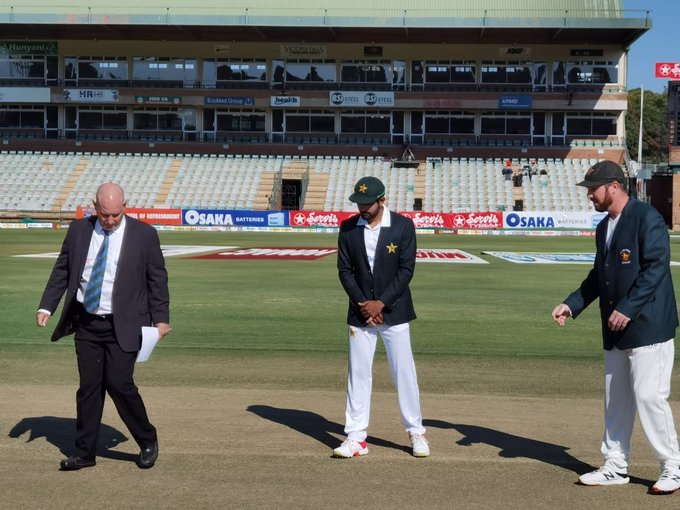 Zimbabwe on Thursday won the toss and elected to bat first in the first Test match against Pakistan being played at Harare Sports Club.

The two countries are playing against each other in the longest format of the game after eight long years.

Off-spinner Sajid Khan has been inducted into the playing XI. Skipper Babar Azam gave him the Test cap.

On Wednesday, Babar Azam said the green shirts were not looking towards any major changes and would most likely go with the same squad that comprehensively defeated South Africa 2-0 in the Test series at home.

This means the only change will be that of Yasir Shah, who is not part of the touring Test squad. Leg-spinner Zahid Mehmood or off-spinner Sajjid Khan could easily fill in the vacant space available.

“We are in no mood to make any unnecessary changes in the team. We are planning to have one odd change in the team for the Test series opener and more interested in retaining the winning combination,” Babar said in a virtual media talk.

Zimbabwe pulled a big surprise last time both countries were seen playing the Test series in 2013, winning the opening Test and then conceding the second to draw it 1-1. The venue was the same where the Test series now will be held.

Azam expressed high hopes from the team that beat South Africa a few months ago, saying that Hassan Ali was at his best when he played against the Proteas in the last Test match, winning the Player of the Match award.

"His reentry into the Test team has given the team a fresh impetus. Hopefully, he would carry forward with the same vein during the forthcoming series," said the Pakistani batsman.

He said left-arm pacer Shaheen Shah Afridi will be in form after having plenty of rest while all-rounder Faheem Ashraf had shown impressive skills in being a formidable Test batsman and someone who could also come in handy with the ball.

Babar said he was expecting a better playing surface during the Tests. “The Harare pitch prepared for the first Test gives a better look. There is a bit of grass on the surface and even the pitch looks firm and suitable for Test cricket. Let’s see how it will behave during the Test," he said.

Azam said he wasn't worried about the team's batting, saying that Azhar Ali and Fawad Alam added depth to Pakistan's line up with their rich experience.

"They have contributed in the past and hopefully would continue backing me and Rizwan in our efforts to raise or chase good totals in Test cricket. I hope openers Abid Ali and Imran Butt would also grasp opportunities coming their way. What I want from my players is to take up the challenge and stay there till the time they achieve that," he said.

Nevertheless, Azam made it clear Pakistan was not taking Zimbabwe lightly, adding that the home side knows its conditions  better than the other side.