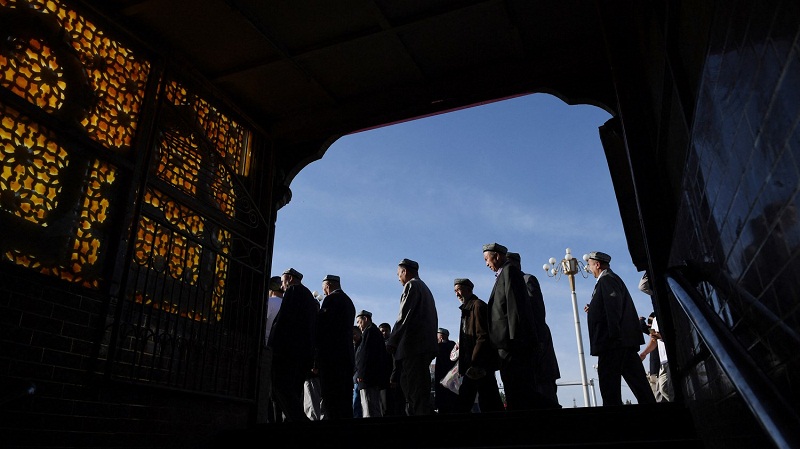 Restrictions on fasting during the holy Islamic month of Ramadan have eased in China’s Xinjiang Uyghur Autonomous Region (XUAR) in recent years, but residents continue to refrain from doing so, according to local authorities, suggesting a lingering fear of being branded an “extremist” and marked for detention.

For years, Uyghurs and other Turkic Muslims in the XUAR have been prohibited from fully observing Ramadan due to religious persecution and restrictions imposed by the Chinese government, which has in many cases banned civil servants, students and teachers from fasting during the holy month.

In certain areas of the region, access to mosques is more tightly controlled and restaurants are ordered to remain open, while Uyghur retirees are often forced to pledge ahead of Ramadan that they won’t fast or pray to set an example for the wider community and to assume responsibility for ensuring others also refrain.

During last year’s April 23 to May 23 Ramadan, RFA learned that authorities in Kashgar (in Chinese, Kashi) prefecture’s Makit (Maigaiti)—a county in which some 83 percent of the population is Uyghur—had informed residents that they were required to turn in any friends or relatives who took part in fasting.

Residents were told that that they could face punishment for fasting, including being sent to one of the XUAR’s vast network of internment camps, where authorities are believed to have held up to 1.8 million Uyghurs and other Muslim minorities since April 2017.

RFA also spoke with an official in Kashgar’s Peyziwat (Jiashi) county at the time who said his township had instituted mandatory attendance at a daily dawn flag raising ceremony, as well as evening political studies, as part of a bid to prevent residents from fasting because those are the only times of the day that they are allowed to eat, according to Muslim tradition.

While investigating the situation in the region during this year’s Ramadan, observed between April 12 to May 12, RFA spoke with representatives of government offices, including religious affairs and United Front offices—many of whom, as in previous years, refused to answer questions related to restrictions.

However, RFA recently contacted a police officer in Toqquzaq (Tuokezhake) township, in Kashgar’s Kona Sheher (Shufu) county, who said that restrictions on fasting had “eased” in his region since 2020, after having been strictly banned for three consecutive years.

‘Free to fast or not’

Speaking on condition of anonymity out of fear of reprisal, he said that meetings about Ramadan are “always being held” at his police station, with authorities informing the public to “stay far away from religious extremism” and “not to believe rumors but to trust in the party and government.”

But amid the propaganda work, he said, residents were being told that “people can fast if they want to,” while those who prefer not to “don’t have a religious responsibility to do so,” suggesting that they have been given a choice.

“[They say] it’s fine for people to practice religion at the lawful place where religious activities are allowed, and that we have never restricted anything,” he said, apparently referring to government-sanctioned places of worship.

“They told people they can fast if they want now that it’s Ramadan, that they are free to fast or not, and that they can practice religion at religious activities and gatherings.”

According to the police officer, restrictions on Ramadan were the toughest for the three consecutive years beginning in 2017, prior to which the influence of “religious extremists” had been so widespread that restaurants throughout his county were completely closed during the holy month, and “nearly 100 percent of people were fasting,” posing “a major threat to national security.”

But despite his claim that restrictions had eased beginning in 2020, the same police officer noted that he has yet to see anyone fasting in his region since then, suggesting that Uyghurs continue to live in an environment of fear.

“I haven’t sensed that [people are fasting] at all … I haven’t come across a single person that I’ve thought is fasting,” he said.

“Many people have become very disgusted by religious extremism … and they worry about being seen and counted as an extremist.”

‘No such thing’ as fasting

A resident of Kashgar’s neighboring Yengisheher (Shule) county seemed to confirm that Uyghurs didn’t dare fast this year for fear of drawing the attention of authorities, adding that he and his relatives were unaware of when Ramadan would even be observed in 2021.

“Oh, no—there’s no such thing now,” said the resident, who also declined to be named, when asked if he was fasting for Ramadan.

“I know neither when Ramadan is starting nor when it ends. I’m going to and from work in the early mornings, so I’m completely unaware, OK?”

Observers have noted that when Chinese authorities find themselves under heavy pressure from the global community over abuses in the XUAR, they often attempt to avoid criticism by temporarily lifting and easing some restrictions in the region. Such measures are used to set an artificial stage—particularly prior to the arrival of international observers and investigators to the XUAR.

While it might be the case that authorities intend to stage such an environment in Toqquzaq and elsewhere in the region, reports suggest that residents have become so fearful of being branded an extremist that they may ultimately be unable to do so.