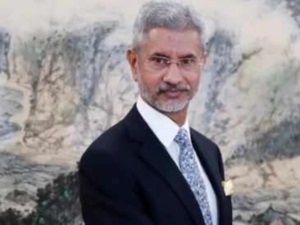 External Affairs Minister S. Jaishankar on Wednesday made it clear that the Quad, is not an “Asian NATO” and India never had a “NATO mentality”. Instead the minister said that in the changing global order, like-minded countries are coming together to form coalitions.
Jaishankar made the remarks at the Raisina Dialogue, in a panel with Jean-Yves Le Drian, Minister for Europe and Foreign Affairs of France, and Marise Payne, Minister for Foreign Affairs of Australia in what was first India-France-Australia Ministerial trilateral of sorts. The three have held Foreign Secretary and senior officials level meetings since last year with a goal to stabilise Indo-Pacific region. Jaishankar said the Indo-Pacific strategic construct is not about reinforcing the Cold War era but to “overcome” it.
“The idea that when we come together and there is some sort of a threat or messaging to others, I think people need to get over this… This kind of using words like ‘Asian NATO’ etc is a mind-game which people are playing.” “I can’t have other people have a veto about what am going to discuss, with whom I’m going to discuss, how much I’m going to contribute to the world. That’s my national choice. That kind of NATO mentality has never been India’s. If it has been there in Asia before I think it’s in other countries and regions, not in mine,” he pointed out.
Jaishankar informed that Quad has dealt with 10 broad subjects so far — vaccine collaboration, higher education and student mobility, climate action, HADR (high availability disease recovery), emerging technology, resilient supply chains, semiconductors, disinformation, counterterrorism and maritime security. “...the purpose of coming together is actually to find ways of working for our national benefit, for our regional benefit and for global benefit,” the Minister said. Jaishankar said, “Indo-Pacific is a return to history. It reflects a more contemporary world. It is actually overcoming the Cold War, not reinforcing it.” “There’s a vacuum which has emerged where multilateral has fallen short.
Powers are not what they used to be, bilateral delivery is not what it used to be, so it requires countries which are comfortable with each other, who see merit in working with each other and who will make the world a better place by working together, come together,” the Minister said, adding,“the world is moving towards groups of countries who are looking to work together… Pick your region, pick your combination, but I think that’s where the world is moving.” French FM Le Drian said, “We share the same willingness to work together simply because we get along well and not just because we share some common interests or concerns, but because we are democracies and because we comply with the rule of law.
Source: economictimes.indiatimes.com