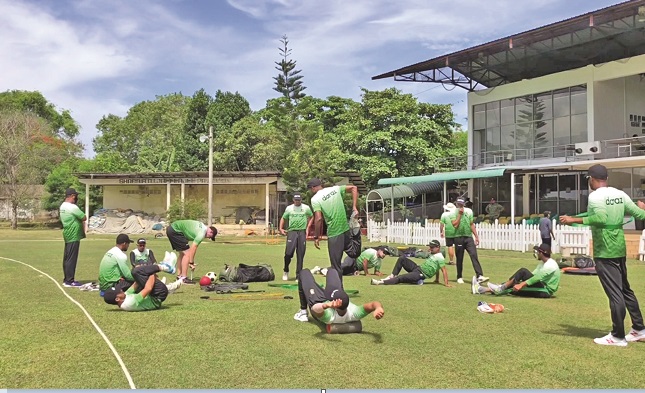 Bangladesh Test opener Saif Hassan said on Thursday that he is eyeing to carry his recent form in the Sri Lanka Test series upon his getting a chance in the playing XI.

“Naturally when you are scoring runs there comes the confidence and I think my batting preparation was top notch along with my fitness and though I didn’t play matches (against West Indies) but had a good practice session in the national nets,” said Saif after Bangladesh completed their first practice session at the CMC in Katunayake.

Saif, who made his Test debut for Bangladesh against Pakistan in 2020, failed to make a cut in the playing XI of Bangladesh’s last Test series against West Indies at home despite he was part of the squad.

Saif’s not selection in the second of two-match Test series raised many eyebrows after opener Sadman Islam was ruled out of the Test with an injury and the team management opted for Soumya Sarkar, who was not even a member of the Test squad initially.

The 22-year old, who struck a brilliant hundred (120) against Ireland Wolves during a five-match one-day series, continued his form in the National Cricket League as he made 235 runs in four innings for Dhaka Division that included a hundred and a fifty.

“I had played a very good series against Ireland Wolves and before coming here had a good preparation in the NCL and so I am carrying the confidence and if I get a chance will try to capitalise it,” he said adding that the intra-squad practice match will be very important for them.

Bangladesh earlier completed their three-day room quarantine in Negombo quarantine centre and were allowed to take part in the practice session after being tested negative on two occasions following their arrival at Sri Lanka on Monday.

The visitors will play an intra-squad practice game scheduled on April 17-18 at the CMC, Katunayake before the team management finalised the final squad for the Test series and cut short the 21-member team.

Meanwhile, it was learnt that Sri Lankan captain Dimuth Karunratne and the head coach Mickey Arthur along with newly appointed Sri Lanka’s director of cricket Tom Moody had a zoom meeting before selecting an 18-member squad for the upcoming series, where the latter acted more as an observer while his inputs will be received from time to time by Sri Lanka Cricket.

The first Test will be played from April 21-25 while the second game will be held from April 29-May 3, with both games to be played in Pallekele International Cricket Stadium in Kandy.