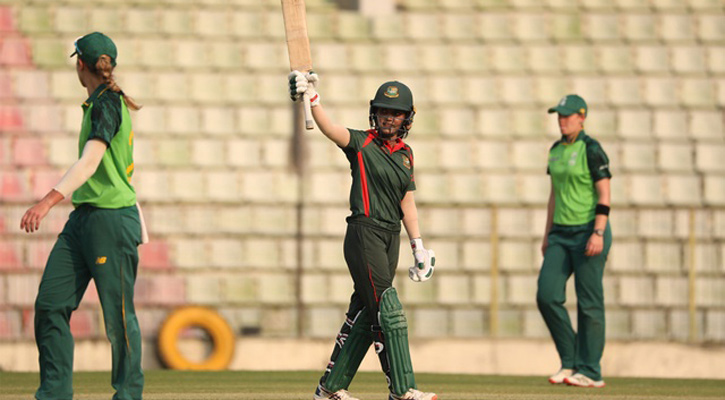 This was the hosts’ fourth victory in a row, having won the first three matches by 54 runs, seven wickets and six wickets.

Opting to bat first, Bangladesh put up 236-4 thanks to Nigar’s 101 after which the bowlers bowled well in tandem to restrict South Africa for 126-9 in 46.5 oves with their last batter being unable to bat.

Nigar was ably supported by opener Murshida Khatun who made 42 and also shared 82-run with her to provide a strong platform after another opener Sharmin Sultan was dismissed cheaply.

Later Shobana Mostary came up with further assistance for Nigar, making 45. Lata Mandal was unbeaten on 25.

Nigar remained not out at the end after playing 132 balls for her 101 in which she struck eight fours and one six.

Fahima Khatun scalped 4-29 to wreak havoc on the South African batting line up. Her four-for was complemented by Salma Khatun’s 2-19 and one wicket each from Ritu Moni, Nahida Akter and Lata Mandal.

Anneke Bosch was the highest scorer with 63 while two other batters Andrie Steyn (12) and Nondumiso Shangase (11) could reach double digit figures.

The fifth and last match of the series will be held on April 13 at the same venue.