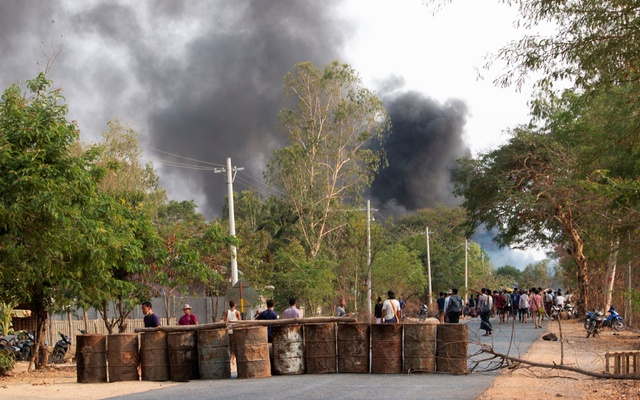 Shan News reported that at least 10 policemen were killed, while the Shwe Phee Myay news agency put the death toll at 14.

About a dozen armed groups have condemned Myanmar's military as illegitimate and pledged to stand with the country's protesters as violence intensifies, opening up the prospect of a much deadlier civil war.

The militias have waged separate insurgencies against the junta since the end of British rule in 1948.

A daylong crackdown by government troops and police in the city forced many residents to flee to nearby villages.

Other media reports have put the death toll in Bago far higher.

A resident told French news agency AFP that at least 40 protesters were killed in the crackdown.

"They piled up all the dead bodies, loaded them into their army truck and drove it away," he said, adding that authorities then arrested several people around the community.

AFP-verified footage shot Friday showed protesters hiding behind sandbag barricades with homemade rifles as explosions could be heard in the background.

Military violence was also reported Friday in several other areas, including Loikaw, the capital of Kayah state in the east, where live ammunition was said to have been deployed.