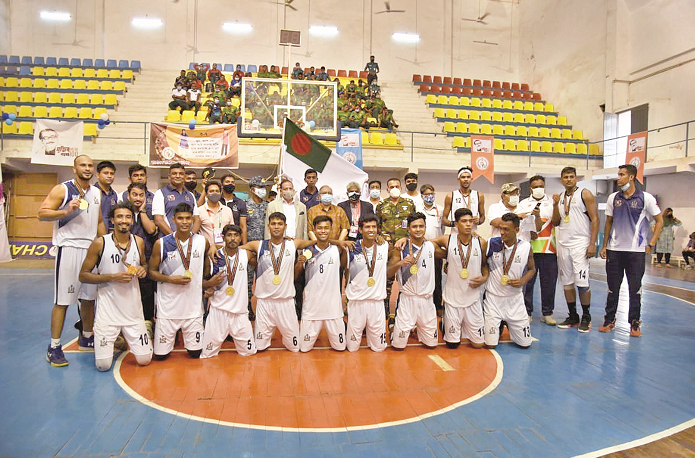 Bangladesh Ansar and VDP continued their domination in the ongoing Bangabandhu Bangladesh Games as they on Thursday became the first team to bag 100 gold medals in the ninth edition of the competition.

Ansar also retained the top spot in the medal tally as they earned a total of 236 medals including 117 gold medals, 72 silver medals and 47 bronze medals.

On Thursday, two new national records were made on the fourth day of weightlifting at the Mymensingh district gymnasium.

Ashikur Rahman from Army earned the gold medal in the men’s 102kg with a new clean and jerk record of 160kg.  The Ansar weightlifter lifted a total of 280kg during his event.

Aminul Islam from Ansar, who earned silver in the same event, made a new snatch record of 121kg. He lifted a total of 274kg in the event.

In badminton, Gourab Singha from Sylhet and Urmi Akter from Ansar earned gold in the men’s and women’s badminton singles at the Shaheed Tajuddin Ahmed Wooden Floor Indoor Stadium.

Ansar secured the gold medal in the women’s handball beating Bangladesh Police by 42-20 goals in the final match at the Shaheed (Captain) M Mansur Ali National Handball Stadium on Thursday.

Titas Club earned bronze in the men’s category while Khulna won the bronze medal in the women's event.

Navy clinched the gold medal in the men’s basketball beating Army by 57-52 points in the final match at the Dhanmondi Basketball Gymnasium.

Ansar, who bagged two gold medals on the opening day of Judo, continued their dream run earning two more gold medals out of three events on the second at the city’s Shaheed Suhrawardy National Indoor Stadium.

Ansar also ended on top in the table with five golds, two silvers and two bronze medals on the fourth and last day of boxing at the Mohammad Ali Boxing Stadium.