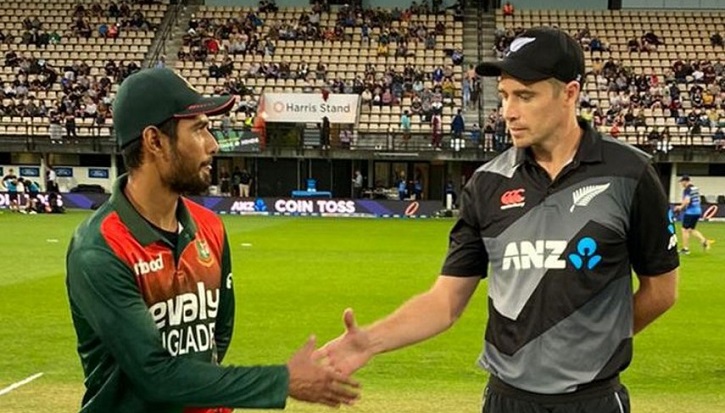 Bangladesh won the toss and elected to bowl in the second Twenty20 international against New Zealand as they seek to avoid a series defeat in Napier on Tuesday.

Bangladesh skipper Mahmudullah predicted cloudy conditions would lead to a rain-interrupted match, making it best to bat second if the target is revised down.

"Hopefully we can restrict them," he said.

"We need to pull up positively from the last game and play aggressive cricket to beat the flying Kiwis."

The tourists slumped to a 66-run loss in the series opener, following on from a 3-0 defeat in the one-day internationals against the Black Caps.

"There were a few chances where we were in the game but we lost it probably off some chances we missed of our fielding," he said.

"The chances we've created we need to capitalise on so we can make it go our way."

In the only change for Bangladesh, paceman Taskin Ahmed came in for Mustafizur Rahman.

New Zealand also had a single change, calling up fast bowler Adam Milne so Lockie Ferguson can take a break.

Captain Tim Southee said New Zealand were motivated as they seek their seventh straight series win on home soil this season across all three formats of the game.

"It's an opportunity to represent your country, so everyone's excited to go out and play the way we have been all summer," he said.