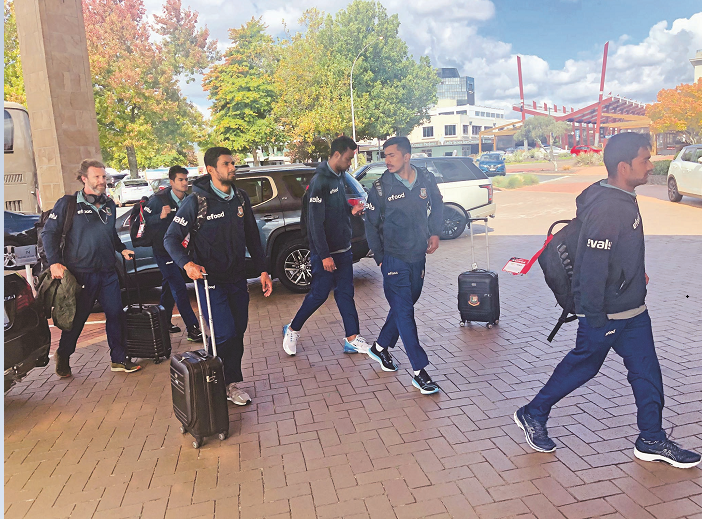 Bangladesh will start life without Tamim Iqbal in the shortest format as they take on hosts New Zealand in the opening match of the three-match T20I series at Seddon Park, Hamilton today.

The match is scheduled to start at 07:00am and will be telecast live on T Sports.

Tamim, who left for Dhaka on Saturday, made an opportunity for young Mohammad Naim to showcase his talent as Bangladesh will also keep their eyes open for the upcoming World T20 in India later this year.

Tamim’s strike-rates in limited-over matches during the last few years have raised a lot of eyebrows and his absence may open the doors at least for 20-over format for others only if they do significantly well.

However, the biggest blow came in the form of Mushfiqur Rahim’s shoulder injury that ruled him out of the opening game.

Mushfiqur received the injury in the last game and according to BCB officials, he is unlikely to be available in the opening game.

Mahmudullah had seemingly chalked out specific roles for his batsmen and found instant validation of his methods during the home series against Zimbabwe but with three down in the ODIs and playing against one of the strongest T20 units at the moment that too at their own den, it is easier said than done.

However, Mahmudullah still remains optimistic and emphasises game awareness ahead of the T20I series as he is well aware that they need to make drastic improvements on the field considering they were sloppy recently in the ODIs.

“Game awareness is very important for us in these conditions as there is always some heavy wind and the balls travel very fast in the air and so the fielders need to be ready for the high and the flat catches,” said Mahmudullah ahead of the T20I series.

“If the fielders are on alert and if we can capitalise those small chances in that particular moment, we can make a difference. The fielding blunders had let us down but in the T20I series, if we can play aggressive cricket, then it is very much possible to defeat them.

“I believe we have the hunger to win and a win in New Zealand is much needed for us, so we would like to bring our best game in the field,” he added.

“We are disappointed as we believe that we couldn't perform up to our level in the ODI series but in the T20 format, the differences between the sides don't come into play,” he said.

“Whether it is a match between the ranked one side and the ranked 9-10 side, it doesn't matter much, as the team performing better on that particular day gets the win in that format,” he added.