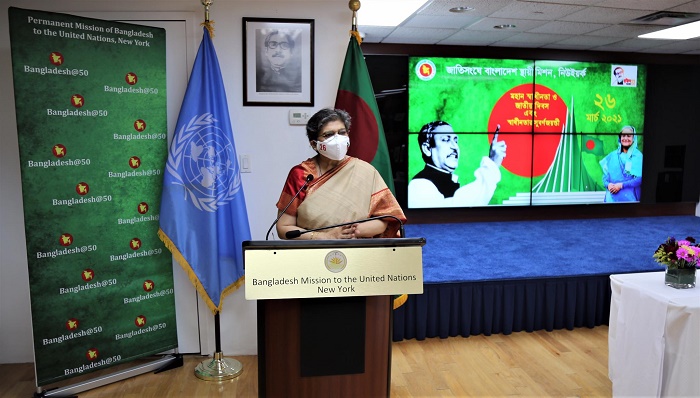 Bangladesh has made tremendous strides over the past five decades and has become a development miracle, said the representatives of the UN and the member states during the celebration of the Golden Jubilee of its independence.

The celebration was organized by the Permanent Mission of Bangladesh to the United Nations in a virtual platform.

High-level representatives of the United Nations Headquarters, Permanent Missions of different countries, UN agencies along with other dignitaries of the international community attended the virtual reception.

The Permanent Representative of Bangladesh Ambassador Rabab Fatima in her welcome remarks paid deep tribute to the Father of the Nation Bangabandhu Sheikh Mujibur Rahman, whose clarion call inspired the whole nation to join the war of liberation.

Ambassador Fatima also paid homage to the three million martyrs who made supreme sacrifice for the independence.

She also recalled the maiden speech of Bangabandhu at the General Assembly in 1974, which eventually determined the course of Bangladesh’s foreign policy based on its trust and confidence in the UN as the center of people future hopes and aspirations.

Ambassador Fatima paid gratitude to Prime Minister Sheikh Hasina, under whose visionary leadership and forward-looking development strategies, “Bangladesh has turned from an impoverished, war-torn state to one of the fastest-growing economies in the world”.

“Last month, the CDP recommended us for graduation from the LDC category. On our 50th anniversary we achieved something which has been a long-cherished aspiration of our entire nation”, she added. She expected hope that, as envisioned by Prime Minister Sheikh Hasina, Bangladesh will be able to able to achieve vision 2041, which is building a knowledge-based, prosperous and developed society. In his video message, the Secretary-General of the UN, António Guterres recognized the tremendous strides made by Bangladesh over the past five decades, particularly on issues of social development and disaster preparedness.

He acknowledged Bangladesh’s valuable role on the world stage as the largest troop contributor to United Nations peacekeeping operations, as Chair of the Climate Vulnerable Forum and also as a host to hundreds of thousands of Rohingya refugees from Myanmar.

“We will continue to stand with Bangladesh in tackling the climate crisis and working for the Sustainable Development Goals”, the SG added. President of the UN General Assembly (PGA), Volkan Bozkir applauded Bangladesh’s contribution to multilateralism, international peace and security, ‘Culture of Peace’ agenda and humanity. He appreciated Bangladesh’s generosity for hosting over one million Rohingya refugees and lauded its great progress on sustainable development.

PGA praised Bangladesh’s “the whole of society approach” for achieving the SDGs and commended its COVID-19 recovery initiatives towards ‘building forward better’. Among others, the Permanent Representatives of Morocco, Ireland, Barbados, Brunei Darussalam, Oman, Sierra Leone, Japan, India, and Kingdom of Saudi Arabia made remarks.

The Deputy Secretary General, Executive Director of UNICEF and the Administrator of UNDP also delivered their remarks. In their remarks the speakers expressed their sincere appreciation to the leadership and people of Bangladesh for their socio-economic progress over the last five decades.

The speakers also paid accolade to Bangladesh for its leadership role in contemporary international issue, such as, women empowerment, peacekeeping, climate change, humanitarianism. Earlier today, in the morning, the day started with hoisting of national flag and playing the national anthem at Mission’s Bangabandhu Auditorium. Special prayer was offered for the salvation of the souls of martyrs.

Messages of the President, Prime Minister, Foreign Minister and State Minister to Foreign Affairs given for the day were read out. Also, the video message of Prime Minister and UN Secretary-General were displayed. The mission also held an open discussion. The Permanent Representative of Bangladesh to the UN Ambassador Rabab Fatima presided over the discussion meeting.