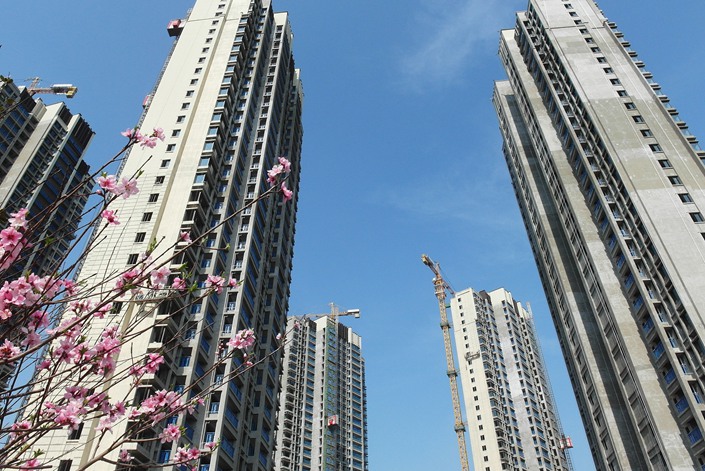 It’s becoming clearer which parts of China’s corporate sector are most at risk of credit-market stress as Beijing pulls back liquidity: property firms, local government financing vehicles and energy producers.

Developers account for a fifth of the $10 billion worth of delinquencies in China this year, while some concern is growing over local state-linked firms after one based in Chongqing missed payments on commercial bills. Coal companies in the country’s northeast are struggling to refinance in the wake of a shock default by a state-owned firm late last year.

Beijing is walking a tightrope of allowing struggling companies to default while trying to avoid stress spilling over into the broader credit market. The Communist Party is making the reduction of financial risk a priority this year as a strengthening economy gives officials room to tackle the nation’s debt mountain. So far its efforts seem to be working: a key indicator of risk appetite in the broader market has remained robust despite rising delinquencies.

“As credit policy normalizes, it will be more difficult to roll over debt and we expect to see more defaults in the quarters to come,” said Carol Liao, China economist at Pimco Asia Ltd. Industries with overcapacity, signs of overheating or that are environmentally unfriendly face some of the biggest risks, she said. They include the coal industry and smaller, highly leveraged developers with projects concentrated in lower-tier Chinese cities.

Borrowers have defaulted on some $10 billion of bonds in China’s onshore and offshore credit markets so far in 2021, the highest on record compared to the same period in previous years, according to data compiled by Bloomberg.

A clampdown on leverage in China’s debt-bloated property sector has brought defaults as Beijing looks to curb borrowing with the “three red lines” effort. The policy limits the capacity of highly indebted firms to raise fresh capital in the credit market.

Listed builders have sold less new onshore debt each month than the total due since June, according to Bloomberg-compiled data, the longest negative net financing streak since at least 2015. The firms entered 2021 having to refinance or repay 309 billion yuan ($48 billion) in outstanding local bonds, the highest maturity wall in at least 11 years, the data show.

Weaker local government-backed borrowers in China are also showing increased signs of stress. While LGFVs have a so-far-unblemished record in public debt markets, there has been a default by a local state-linked firm on commercial bills this year.

Chongqing Energy Investment Group Co.’s dollar note due in 2022 lost more than half its value after it emerged the firm failed to pay 915 million yuan of borrowings. Analysts are also flagging rising credit risks among LGFVs in Hunan and Yunnan provinces while saying local-government credit divergence is set to accelerate. So-called hidden debt at local levels was elevated to a “national security” issue at China’s annual legislative meetings this month.

“We definitely will be even more prudent with name selection now as most of these entities still rely on an active primary market” to roll over debt and require fresh capital inflows, said Edmund Goh, Asia fixed-income investment director at Aberdeen Standard Investments in Shanghai. Focus will now be on short-term cash coverage and asset quality for local state-owned enterprises, he added.

S&P Global Ratings currently has a net negative outlook bias on its rated SOE portfolio, “mainly due to the unsustainable capital structure for certain companies, potential weakening of some local governments’ fiscal positions and government support that has become more selective,” according to Chang Li, an analyst at the firm.

Refinancing pressures in China’s coal-producing regions are set to squeeze commodity firms in those locales. The sector has struggled to restore investor confidence following the default of Yongcheng Coal & Electricity Holding Group Co. in November, and already faces challenges as Beijing pursues consolidation and a national goal of net zero carbon emissions by 2060.

The refinancing ratio, which measures the level of monthly issuance relative to maturing debt, weakened the most in neighboring Shanxi and Hebei provinces, according to data compiled by Bloomberg of corporate bonds issued in China. Companies in Shanxi, one of China’s biggest coal producers, only raised enough money to cover 25% of February’s maturing debt, the least in nearly three years and versus 184% in December. February’s figure for Hebei firms was 18%, compared with 124% in December.