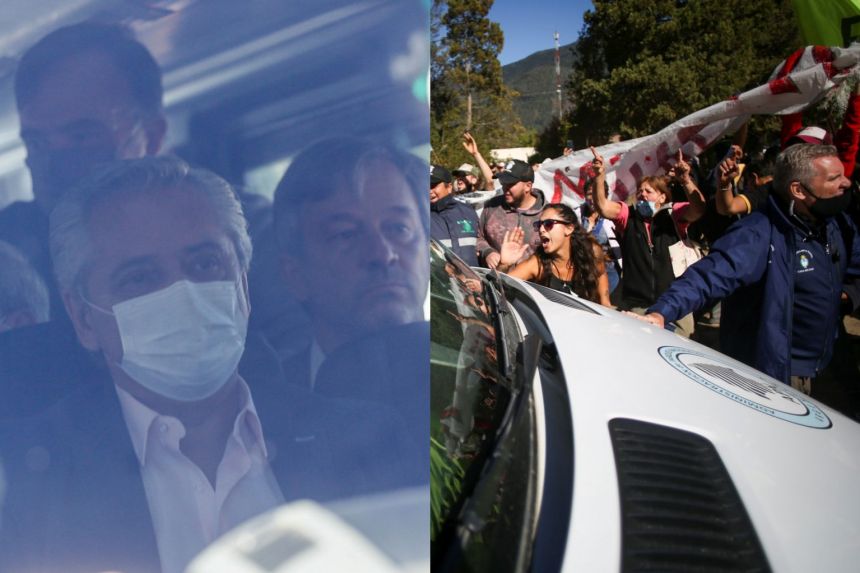 Dozens of protesters kicked and threw rocks at a minibus carrying Argentine President Alberto Fernandez on Saturday as he visited an area devastated by forest fires, TV footage showed.

As he left a community center in the town of Lago Puelo in the southern Patagonia region, Fernandez had to take refuge behind a wall of people as a crowd of demonstrators pushed toward him and his delegation.

The protesters later stopped the bus carrying the president, punching and kicking it and throwing stones that broke windows in the vehicle, according to footage broadcast by the TN network and the newspaper Clarin.

With few police on hand, the crowd managed to halt the president's bus and other vehicles in his entourage for several minutes, with some protesters throwing themselves against the hood of Fernandez's vehicle.

Once it was freed, several other vehicles snaked their way through the crowd and sped away with the presidential bus.

Clarin reported that the demonstrators were angry over mining projects in Chubut province, which is part of Patagonia, and with the provincial governor.

The fires that have blazed through Patagonia for days have claimed one life, while 11 other people are reported missing, officials said Friday.

Dozens of people have been evacuated from the path of the advancing flames, and some 200 houses have been destroyed.

The government said some towns were left without water or power.

The fires, which authorities suspect were started deliberately early this week, have reached several towns near the foothills of the Andes mountains, and have consumed about 15,000 hectares (37,000 acres) of forest, media reported Saturday.

The charred body of a rural dweller, reported missing since Tuesday, was found near the town of El Maiten, they added.