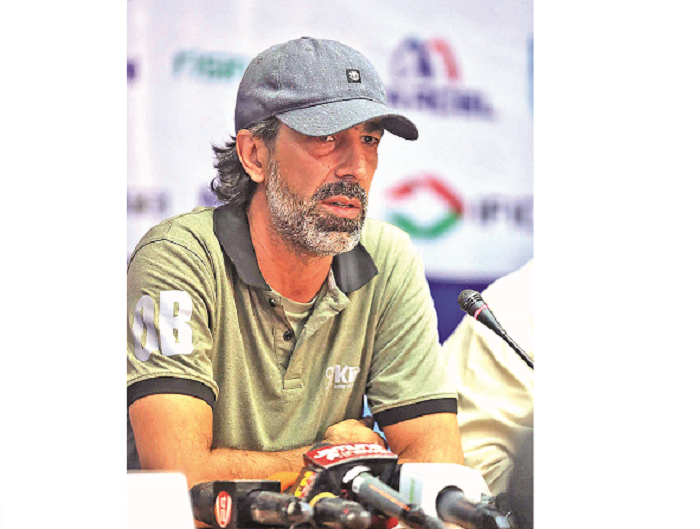 The reigning champions Bashundhara Kings head coach Oscar Bruzon is not ready to get complacent with his charges’ performances in the first leg of the ongoing Bangladesh Premier League as he believes they still have to go a long way to retain the title.

“In our case, there is no room to relax or to feel that the job is done as under those circumstances, many teams could become title contenders if they start well in the second leg,” Bruzon told The Daily Sun in a recent interview.

The Spanish coach returned to his home in Spain surely with a happy face after the completion of the first leg of ongoing BPL as his side is leading the points table with an eight-point lead over the second-placed side.

Since the current edition of BPL got underway on January 13, Kings maintained their domination in the points table and remained on top of the table from round one with no other team could have dethroned the current champions.

Third-placed Dhaka Abahani Limited have secured 25 points from seven wins, four draws and one defeat in the league.

Saif Sporting Club are in fourth place with 22 points while Sheikh Russel Krira Chakra in fifth with 20 points and Mohammedan SC Ltd and Chittagong Abahoni Ltd are in sixth and seventh place respectively with 19 points each.

Bruzon tagged the ongoing BPL as a very competitive one as the top teams in the points table apart from Kings have narrow points gap between them.

“The BPL has been very competitive so far, from the second to the seventh position there is a gap of only seven points,” he said.

Kings, who scored the highest 32 goals in the league so far, just conceded five goals, less number of goals conceded by a BPL team this year.

Bruzon, the 43-year coach however didn’t hesitate to credit his charges for their tremendous performance in the league so far.

“But throughout the season, we have adjusted pretty well to our game style. As the game requirements are radically different when we play at our home where we can dominate under possession and positional game or when we play in Dhaka which needs a more physical and direct approach,” he said.

The second leg of Bangladesh Premier League is expected to get underway on April 8 or 9.