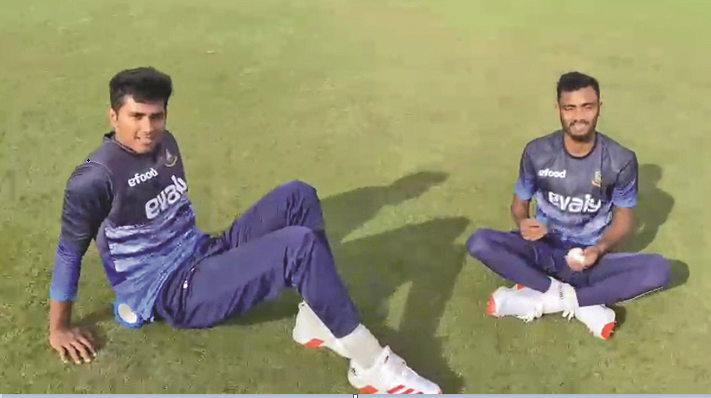 Bangladesh cricketers and staff heaved a sigh of relief as on Tuesday they completed their mandatory 14-day quarantine successfully and it will enable them to start their full-fledged preparation ahead of the white-ball series against New Zealand.

Bangladesh Cricket Board informed that the national cricket team will depart for Queenstown today after all members of the squad were reported Covid-19 negative in their fourth and final Covid-19 test.

“At the end of the 14-day mandatory self-isolation period, the team departs Christchurch for Queenstown tomorrow (today) afternoon for a five-day camp before moving to Dunedin on 16 March,” BCB said in a media statement, adding that Tuesday was the last day of group training and group gym session in the quarantine period.

Bangladeshi rookie pace bowlers Hasan Mahmud and Shoriful Islam looked to be over the moon as they will be like free birds Wednesday.

“I am feeling extremely happy as we are finally getting over the quarantine and it is also the last day of the practice sessions (among groups),” said Hasan.

Shoriful admitted that the first week of the quarantine was a difficult period for him.

“First seven days was quite difficult but it was good in the next week when we were allowed to practice for two hours. But now we are feeling good as the quarantine is finally coming to an end,” said Shoriful.

Bangladesh team can also be excited as their spin consultant Daniel Vettori, who did not join the national team during the home series against West Indies due to quarantine issues, is expected to join them in Queenstown.

Meanwhile, New Zealand Cricket said on Tuesday that their all-format skipper Kane Williamson has been ruled out of the upcoming ODI series against Bangladesh, starting on March 20 in Dunedin, as he has to rest and rehabilitate from a left elbow injury.

Williamson has a small tear in his left elbow tendon and is said to have been experiencing irritation since the second half of the summer.

“Time-frames can vary but we're hopeful that, after an initial rest, he should be able to begin rehabilitation next week,” Shackel added.