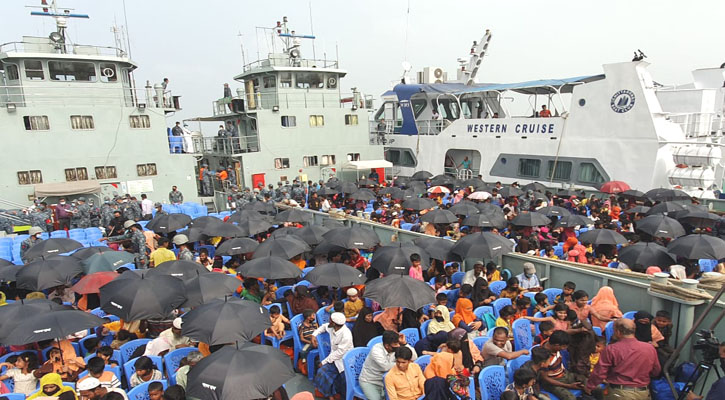 A total of 2,260 Rohingyas have left Cox’s Bazar for Bhasan Char in Hatiya upazila of Noakhali district as part of the government’s move to relocate some 3,500 forcibly displaced Myanmar nationals to the island in the fifth phase.

Six vessels of Bangladesh Navy carrying the Rogingyas left the Chattogram Boat Club around 10:00 am on Wednesday.

Additional Refugee Relief and Repatriation Commissioner Mohammad Shamsud Douza said that the Rohingyas who voluntarily agreed to go to Bhasan Char are being taken to the island.

Earlier on Tuesday, they were brought to Chattogram from different camps in Ukhiya and Teknaf upazilas of Cox’s Bazar.

In the morning, they gathered on the Ukhiya Degree College premises where government officials briefed them on various issues.

A total of 21 buses carrying Rohingyas started for Chattogram around 1:15pm. They stayed overnight at BAF Shaheen College, Chattogram under the supervision of Bangladesh Navy.

Earlier, a total of 9,709 Rohingyas were relocated to the island in four phases since December 4 last year.

The second batch of Rohingyas reached Bhasan Char on December 29 last year while the third batch on January 29 and 30 this year and      the fourth batch on February 15 and 16.

Bangladesh is currently hosting over 1.1 million Rohingyas and most of them took shelter in Cox’s Bazar in the face of ethnic cleansing and genocide by Myanmar security forces from August 25, 2017.

In addition to modern accommodation for the Rohingyas, educational institutions, hospitals, clinics and playgrounds have already been set up at Bhasan Char.

Bangladesh Navy implemented the Tk 31-billion housing project, funded with public money, after the government planned to relocate a portion of them to the island.

There are 1,440 cluster houses and 120 four-storey shelter houses to accommodate more than 1 lakh people.