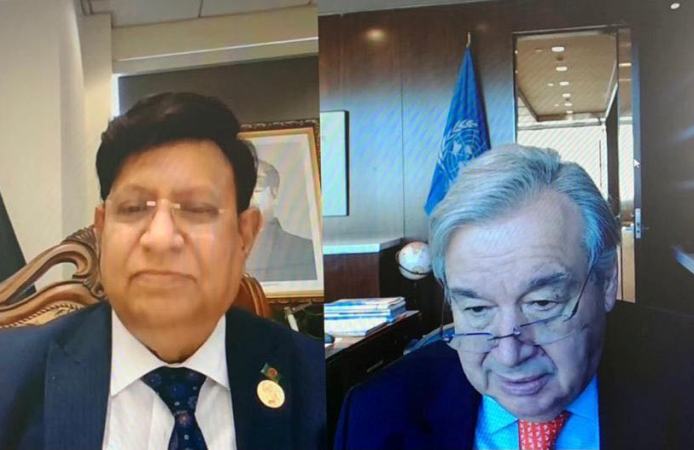 The Secretary General of the United Nations Antonio Guterres highly applauded Bangladesh’s tremendous efforts in mitigating the health and socio-economic consequences of the COVID-19 pandemic.

Referring to Bangladesh’s past successes in disaster management, the UN Secretary General said, in view of Bangladesh’s ranking as a global leader in risk mitigation, he was not surprised to see such accomplishment.

He expressed admiration for Prime Minister Sheikh Hasina, especially for her strong commitment to the people of Bangladesh.

They also agreed that COVID-19 vaccination should be treated as ‘global public good’.

The Secretary General highly appreciated Bangladesh’s generosity in giving shelter to the Rohingyas and reiterated that, “Return of refugees to Myanmar is our common objective”.

The Secretary General said that the UN stands ready to support Bangladesh in resolving the crisis. The Foreign Minister apprised the Secretary General of the measures taken by the Government in Bhashanchar and requested the UN’s support for humanitarian assistance there for the Rohingyas.

Appreciating SG’s strong commitment to climate action, the Foreign Minister welcomed Secretary General’s call to mobilize climate financing and told that as the current CVF President, Bangladesh would continue to work together with the UN to achieve climate ambition and build resilience in preparation for the COP 26 in Glasgow this year.

Stating that fighting climate change is the battle of his life, the Secretary General mentioned he would be pursuing the donors to allocate 50% of proposed climate funds for adaptation strategies.

He termed Bangladesh’s enormous adaptation efforts on the coastal region and managing rivers as remarkable efforts.

Expressing satisfaction that Bangladesh is going to graduate from LDC category, Foreign Minister requested the Secretary General to use his good offices to convince development partners and IFIs to incentivize the graduating countries with new support mechanisms even after graduation.

Sharing his views, the SG mentioned that graduation should not be considered a technocratic issue measured only by GDP, instead a multidimensional vulnerability index may be used while considering this.

He commented, “graduation should not be punished rather rewarded”.

Foreign Minister discussed, among others, the issues of the twin celebration of birth centenary of the father of the Nation Bangabandhu Sheikh Mujibur Rahman and the golden jubilee of our independence, peacekeeping, LDC issues and SG’s reelection bid.

He invited the Secretary General to participate in the celebration of Mujib Year and the Golden Jubilee of our independence.

Permanent Representative of Bangladesh to the UN in New York, Ambassador Rabab Fatima was present during the meeting.

Foreign Minister Dr Momen is currently visiting Washington DC on an official trip to reach out the new Administration to further enhance the bilateral relations and to convey Bangladesh’s willingness to work closely with the new US Administration.