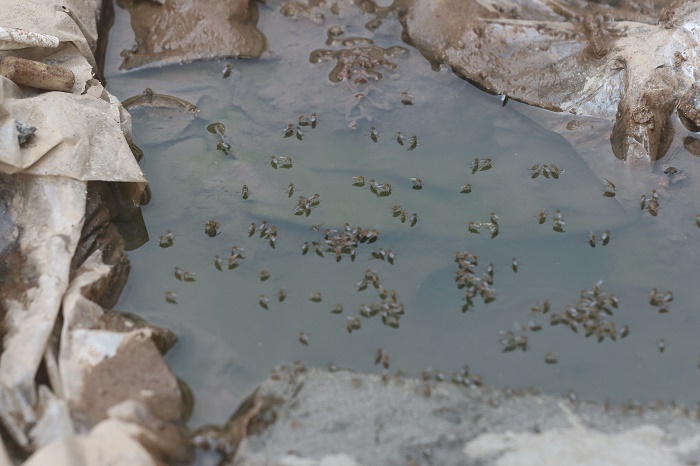 A stagnant pool of water at Fulbaria bus stand in the capital's Gulistan area has become a breeding ground for mosquitoes. The photo was taken on Saturday.

The people in the capital are not getting respite from mosquito menace despite the efforts of the authorities concerned to tame the tiny tyrants.

People alleged that ineffectiveness of pesticide and lax monitoring by the authorities concerned are the reasons behind the problem.

Abdullah Al Mamun, a resident of Boro Mogbazar area under Dhaka North City Corporation (DNCC), said they want to get relief from mosquito menace at any cost.

“Mosquito menace has got worse in our area. It is unbearable for us. Our children cannot study at home. We always keep our fan on to ward off the insects. Mosquito repellents cannot provide us with relief,” he said.

“It is difficult to stay home even during the daytime without mosquito net,” he said.

When asked in this regard, the city corporation authorities blamed dumping of solid garbage into the local water-bodies for the menace.

They also alleged that the citizens don’t take care of their abandoned properties and water-bodies.

They said they would conduct mobile court against the owners of the buildings and free spaces lying uncared for.

DNCC Deputy Chief Health Officer Md Golam Mostafa Sarwar said that they would begin special drive from February 20 to 28 in private properties which they think the main sources of mosquitoes.

“We will conduct mobile court against those people who have left their properties for breeding mosquitoes. We will divide all the wards into 10 parts and each part will be parted in seven segments for the convenience of the drive,” Sarwar said.

He also blamed the city dwellers for lack of awareness about cleanliness in the respective areas.

“We are trying our best to curb mosquito problem in the capital,” he added.

Regarding effectiveness of the pesticide, DSCC CEO ABM Amin Ullah Nuri said that they discussed the issue and decided to increase the dose of the pesticide into Kerosene.

He said, “The representatives of Plant Protection Wing, IEDCR and Jahangirnagar University set the dose of Deltamethrin. We are allowed to mix four millimeter Deltamethrin into one litre of Kerosene. World Health Organisation doesn’t allow more than this and environmentalists protest if we want to prepare more powerful pesticides.”

“We have decided to increase quantity from 5-8 millimeter per litre of Kerosene,” he added.

ABM Amin Ullah Nuri also said that they would conduct drive against some private ponds which have turned into major mosquito breeding grounds in the newly formed wards of the capital.

He also claimed that mosquitoes enter DSCC areas from other areas.