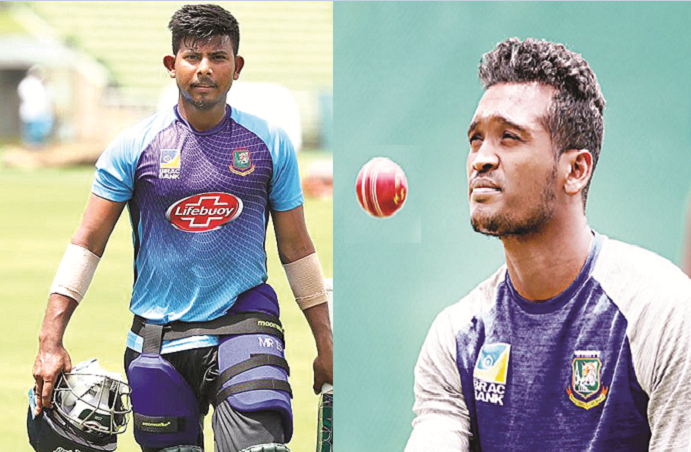 Pacer Al-Amin Hossain and all-rounder Mosaddek Hossain have been recalled as Bangladesh Cricket Board on Friday announced a 20-member squad for the upcoming one-day international and T20I series against New Zealand.

Left-arm spinner Taijul Islam, who was a part of the recently-concluded series against the West Indies, was excluded from the squad without getting any chance to feature in a game in that series.

Taijul last played a limited-over game for Bangladesh in March 2020 against Zimbabwe.

Aminul Islam Biplob, who was part of the T20I squad against Zimbabwe, also failed to make a cut in the New Zealand bound tour party.

Mosaddek last played an ODI against Sri Lanka in July 2019 and a T20I in November against India in the same year and he was handed the spot following the withdrawal of Shakib Al Hasan.

Al-Amin played the last of his ODIs against Zimbabwe in March 2020 and he is expected to bolster the strength of the pace unit.

Left-arm spinner Nasum Ahmed, who was in the squad for the T20 series against Zimbabwe but did not play in any game, earned the recall due to the poor form of Taijul in white-ball cricket.

Naim Sheikh, who was part of Bangladesh’s last T20I series against Zimbabwe, was called in the 20-member squad for the New Zealand series.

BCB chief selector Minhajul Abedin told The Daily Sun that they have recalled Al-Amin to make the pace unit strong in the T20I format while Mosaddek was included as they needed an all-rounder in place of Shakib.

“We included Al-Amin as we are well aware that wickets will be pacer friendly in New Zealand and we need to bolster the strength of the pace battery in the T20I format,” said Minhajul.

“We needed a like-for-like replacement of Shakib and at the moment Mosaddek is the best possible option we have in our possession,” he added.

Minhajul further said that they have decided to prepare another left-arm spinner for white-ball cricket and want Taijul to focus on red-ball cricket.

“Look Taijul needs to focus on red-ball cricket and we feel instead of making him a multi-format bowler he should put all his effort in longer-version format,” he said.

“We have to prepare another left-arm spinner for the white ball and that is the sole reason we have included Nasum as we feel it is the right time for him to get some international exposure,” he added.

Minhajul added that Aminul could not make it to the squad due to his sickness.

“He is sick and yet to recover fully following the sinusitis operation and we have kept him HP to make a pathway for him to return to the national fold. If he can take the load against Ireland Wolves surely we can consider him for the future,” he concluded.

Following the forced changes in the itinerary due to COVID-19 related challenges, Bangladesh will now leave for New Zealand on February 23.

The three ODIs will be played on March 20, 23 and 26 in Dunedin, Christchurch and Wellington respectively while the T20Is will be held on March 28, 30 and April 1 in Hamilton, Napier and Auckland respectively.