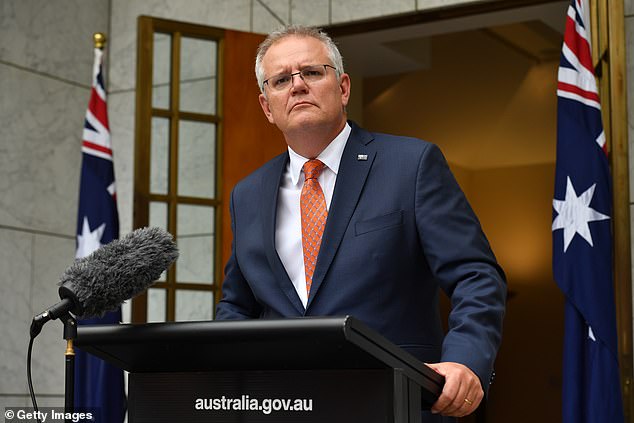 Prime Minister Scott Morrison has claimed Victoria's controversial Belt and Road Initiative agreement with China has no benefits and could be ripped up in a matter of weeks .

Victorian Premier Dan Andrews signed a memorandum of understanding in 2018 with China relating to its mega, $1.5 trillion 'One Belt, One Road' policy, but the deal - which would have given Beijing's funding and control of key Victorian infrastructure - came under heavy criticism.

Andrews, and other state premiers and chief ministers, must detail to the Commonwealth all agreements made with foreign powers by March 10, which will then be assessed by the Federal Government.

And Mr Morrison sent a blunt message to Victoria about the future of its deal with China.

'I haven't seen the benefits of it,' Mr Morrison said to the Herald Sun.

'If there are benefits, what are they and what was paid for them? I don't have the answers to those questions at this point, but the assessment of those arrangements will continue.'

Andrews has so far defended the agreement and had promised it would mean 'more jobs and more trade and investment for Victorians', but there is growing concern state deals could become a back door to foreign nations increasing their influence in Australia.

'We didn't agree with it in the first place, still don't agree with it, and no doubt decisions on that will be made in due course,' Treasurer Josh Frydenberg said of the Victoria-China agreement.

The intervention was made possible when Federal legislation was passed in December allowing the foreign minister to review and scrap state, territory, local council and public university deals with other nations.

China responded by accusing Australia of 'putting bacteria' in the relationship between the two nations after Morrison tabled the new legislation.

When asked in Beijing on Thursday about the Australian government's plan to tear up Victoria's deal, Chinese Foreign Ministry Spokesman Zhao Lijian sang the praises of the initiative and lashed out at Canberra.

'We hope Australia will view such cooperation objectively and reasonably, and stop putting bacteria into this relationship and do more to improve our mutual benefits,' The Australian reported.

'China's cooperation with the Victorian state under the BRI has enhanced the benefits for people on both sides of the deal.'

This included security issues related to critical infrastructure, as well as those associated with espionage, propaganda and cyber threats.

Professor Medcalf says federal security briefings to state-based counterparts - such as those which occurred on the BRI - are not always taken seriously enough, often because state officials are not cleared to hear all details.

According to the Lowy Institute, the Belt and Road Initiative is motivated by strategic as well as economic factors.

'The combination of strategic and economic drivers is not always easy to reconcile,' wrote Peter Cai, the institute's Project Director, Australia-China Relations.

'In some cases, China's strategic objectives make it difficult to sell the economic aspects of the initiative to China's neighbours.'